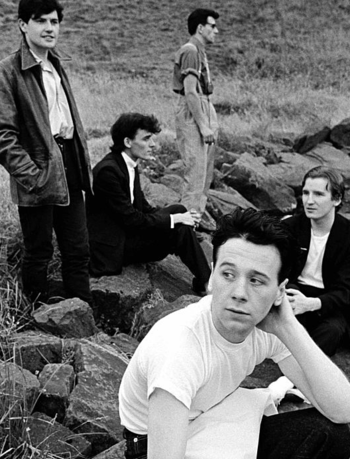 Simple Minds are a long-running Scottish rock band, centered on singer Jim Kerr and guitarist Charlie Burchill. They began as part of the Punk Rock and New Wave movement of the late 1970s, and rose to become one of the iconic bands of The '80s. In Europe, they can still draw a crowd; but in America, they are known almost entirely for a Black Sheep Hit they didn't even write, "Don't You (Forget About Me)", which became famous for its appearance in The Breakfast Club.

Kerr and Burchill were friends since childhood. In 1977, they joined a punk band called Johnny & The Self-Abusers, which released one single and broke up. Kerr and Burchill, along with Self-Abusers bandmates Tony Donald (bass) and Brian McGee (drums) renamed themselves Simple Minds, after a line in the David Bowie song "Jean Genie". The next year and a half saw much touring and a demo tape. Mick MacNeil joined on keyboards, and Donald was replaced by Derek Forbes on bass. They became known for their live act, and were signed to Zoom, a division of Arista Records.

In early '79, they recorded their first album, Life in a Day. Sales were disappointing, and the band quickly dismissed it as sounding too much like their influences (David Bowie, Genesis, Roxy Music, and the Punk and New Wave around them). Their next album, Real to Real Cacophony, was dark, moody, and experimental. It sold even less than Life in a Day. Their third album, 1980's Empires and Dance, was proto-Industrial, sold poorly again; by this time Arista had had enough and the band transferred to Virgin Records.

Simple Minds perfected their sound around this time, a mixture of New Wave, Progressive Rock, and Electronic Music. They recorded enough material for two albums, variously released as Sons and Fascination and Sister Feelings Call or as one double album. This produced their first hit, "Love Song", and caught the attention of Peter Gabriel, who chose them to open for him on a European tour. They were beginning to succeed; but the constant recording and touring was too much for Brian McGee, who left at the end of the recording sessions.

Kenny Hyslop replaced McGee for the Sons and Fascination tour, and played on the next single, "Promised You A Miracle", but didn't fit in with the band and left. Mike Ogletree was next, and wrote the drum parts for their next album. But he left too, and handed his drum parts to Mel Gaynor. Mel turned out to be the perfect drummer for Simple Minds, with a combination of skill and brute force. And so the classic Simple Minds lineup was completed, as was the album that would be considered their greatest artistic achievement, New Gold Dream (81-82-83-84).

New Gold Dream went to #3 on the UK albums chart, and since its release in 1982 it has been considered a masterpiece of the New Wave movement in general. But for the band, it was as far as they could go with subtle textures and delicate moods. A new sound was needed, so they cranked the volume and intensity Up to Eleven for their next album. Sparkle in the Rain was a huge worldwide success (except for America, which continued to ignore them) and produced three hit singles, "Waterfront", "Speed Your Love To Me", and "Up On The Catwalk".

One American who did take notice was filmmaker John Hughes, who convinced them to record a song for his next movie, The Breakfast Club. To Simple Minds, it was a lightweight pop song; but to Americans, "Don't You (Forget About Me)" note Written by Keith Forsey, who did the music for Flashdance, and Steve Schiff, guitarist for Nina Hagen was romantic gold, and it became their biggest U.S. hit. The band found themselves with a Black Sheep Hit, and spent many years dismissing it.

Constant work took its toll on another band member, Derek Forbes, and he was replaced with former Brand X bassist John Giblin. With guest vocals from Chic's Robin Clark, they released Once Upon A Time, which conspicuously did not include "Don't You". What it did have was stadium-friendly rock, which brought in a lot of new fans, and gave them their only 'proper' U.S. hit, "Alive And Kicking". The tour produced a live album, Live in the City of Light.

During the three years of fame and touring that followed Once Upon A Time, the band took an interest in politics. This led to their only UK #1 single, "Mandela Day", and their next album, Street Fighting Years. Street Fighting Years addressed political topics from Apartheid to The Troubles to the Berlin Wall. Musically, it brought back the subtlety of New Gold Dream, though with acoustic rather than electronic instruments, creating a Celtic folk-rock sound. Once again, work took its toll, and Giblin and Gaynor both left during the recording sessions. Street Fighting Years rose to the top of the UK album charts, but America didn't want to hear about the worries of the world.

They hired ex-Pretenders bassist Malcolm Foster and session drummer Andy Duncan, and went on tour, but as the tour was ending, Mick MacNeil announced that he needed a break. This turned out to be a Berserk Button for Kerr and Burchill, and the ensuing argument meant that what could have been a temporary break turned into a permanent leave. For many fans, this was when Simple Minds Jumped the Shark; MacNeil's Heroic Fantasy-evoking keyboards were essential to the band's sound. But the show would go on.

Mel Gaynor returned for Real Life, a sequel to Street Fighting Years. It went to #2 in the UK, but the U.S. shut the door on Simple Minds, this time for good. Gaynor left again in '92 (he would return in '97 and stay until '98 and return in 2002 and remain until 2016), and since then Simple Minds has officially been a duo of Kerr and Burchill. Their last album of the stadium rock era was 1995's Good News from the Next World.

In 1996, they signed with Chrysalis Records. It was time for another New Sound Album, the purely Electronic Music Neapolis. It went back to the sound of Real to Real Cacophony and Empires and Dance, and like those albums, didn't sell well. But Simple Minds would stay with this sound for a while, through the aborted Our Secrets Are The Same (a victim of Chrysalis/EMI merger politics, finally released in 2004 as part of a box set), the Cover Album Neon Lights, and 2002's Cry.

Other albums of note: