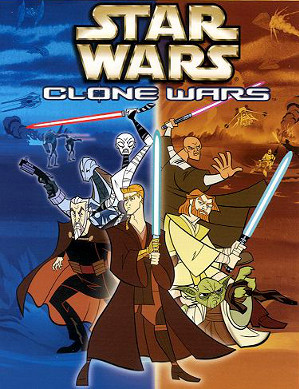 "Like fire, across the galaxy, the Clone Wars spread. In league, with the wicked Count Dooku, more and more planets slip. Against this threat, upon the Jedi Knights falls the duty, to lead the newly formed army of the Republic. And as the heat of war grows, so too grows the prowess, of one most gifted student of the Force."
— Yoda
Advertisement:

Star Wars: Clone Wars is an Animated Adaptation Microseries, written and directed by Genndy Tartakovsky, and produced by Cartoon Network. Airing from 2003 to 2005, Clone Wars is set in the Star Wars Legends universe, between the events of Attack of the Clones and Revenge of the Sith. Whereas the Prequel Trilogy teases us with the beginning and end of the Clone Wars, this miniseries puts the "Wars" back in Star Wars and actually shows the meat of that galaxy-spanning conflict.

It is not to be confused with the CG film and TV series Star Wars: The Clone Wars. It could be considered a spiritual pilot for that series, and the two share a few voice actors, but don't have any of the same writers.

The first volume of the series (Seasons 1 and 2) shows Obi-Wan Kenobi and Anakin Skywalker leading the Clone forces in the Battle of Muunilinst. Obi-wan leads the ground forces, and ends up battling the mercenary Durge. Meanwhile, Anakin leads the space battle, then gets drawn into a one-on-one fight with the Dark Jedi Asajj Ventress.

Interspersed with this are shorter scenes from other characters and other battles: ARC troopers taking a key enemy position on Muunilinst, Kit Fisto fighting underwater on Dac, Yoda and Padme rescuing two Jedi ambushed on Ilum, and Mace Windu battling an army on Dantooine.

Then General Grievous shows up and kills a bunch of Jedi. A bunch.

The second volume of the series (Season 3) has only two main storylines and no side-stories. Beginning with the rescue of the Jedi from the last season's cliffhanger, it shows the tide of the war shifting against the Republic due to Grievous' arrival. The Jedi Council responds by promoting Anakin to Jedi Knight. A montage of Anakin kicking butt ensues, then he and Obi-wan are dispatched to Nelvaan to find Grievous. In this story, Anakin receives a trippy vision quest that foreshadows his later fall to the Dark Side.

Although the series is no longer canon, it appears to be connected to the canonical The Clone Wars series that began in 2008 through Broad Strokes, particularly concerning Asajj Ventress (as the series acts like she and Anakin have already met). In the final arc of that series, it's mentioned that Shaak Ti is sent to protect Palpatine during the Battle of Coruscant, which is consistent in both continuities.

The series had twenty-five episodes in total, running at about 2 hours and 20 minutes — around the length of the Star Wars movies of the era. Lucasfilm released a recut of the microseries as two large narratives on DVD — Volume I covering the first twenty segments, and Volume II covering the remaining five — cutting out only minor bits of redundant footage. Unfortunately, the series was never released in any other format for a very long time... Until it joined the Disney+ library in April 2021, released in the mini-movie format rather than through individual segments.

This microseries provides examples of:

Example of:
Multi-Armed and Dangerous