Spoilers for all of Star Wars: The Clone Wars preceding this season are left unmarked. You Have Been Warned! 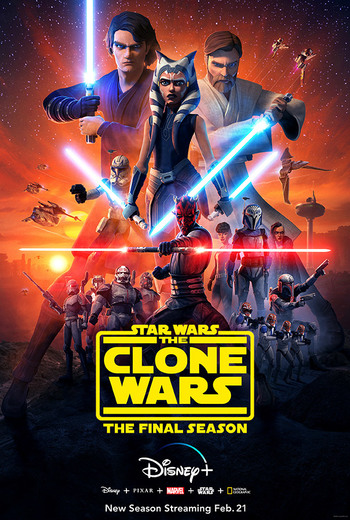 The war isn't over yet.
"Soon, the galaxy will be remade. The Jedi... and Republic, will die."
— Darth Maul

Star Wars: The Clone Wars returns for a seventh and final season. Created by George Lucas and directed by Dave Filoni, the series was initially cancelled in 2013 after the conclusion of its fifth season, with a sixth season being released in 2014, and was then revived in 2018 with a 12 episode season.

Following up on the events of the previous seasons, the Clone Wars continues to wage across the Galaxy. The clone troopers (Dee Bradley Baker) continue to fight for the Republic, while former Jedi Padawan Ahsoka Tano (Ashley Eckstein), still reeling from her departure from the Jedi Order, struggles to adjust to civilian life, all before the war comes to an end.

The season premiered exclusively on Disney+ on February 21, 2020.

Alright, Tropers. What's so important that you brought us all the way back here?