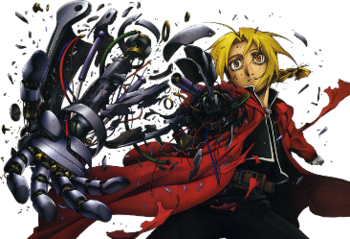 Hey, it's better than losing the real one.
"Your prosthetic arm just saved your life."
— Slicer, Fullmetal Alchemist
Advertisement:

This character has Artificial Limbs, Electronic Eyes or other prostheses, and while they don't have to be a full Cyborg — the rest of them can just be squishy human flesh — what they do have is far stronger, more durable and just plain better than their former body part (if it existed). There's only one problem: it keeps getting wrecked. Enemies shoot like there's a bullseye on it, falling rocks gravitate towards it and it falls off at the drop of a hat like the character is some Steampunk leper. Meanwhile, their natural appendages never suffer more than flesh wounds, despite being made of far less hardy stuff.

Often Fake Arm Disarms are used to temporarily bring a character down to normal in a way that preserves the status quo. Destroying the flesh-and-blood arm of a character would gravely injure them and provoke major Character Development, but a prosthesis can be broken or detached without endangering the character and fixed with relative ease after the fight. It's also a popular means of including some Bloodless Carnage and Amusing Injuries for similar reasons.

On the other hand, the character can also Invoke the trope in order to protect their less replaceable limbs by leaving the prosthesis behind as a decoy while they escape. May also come in handy during a Life-or-Limb Decision.

Frequently Justified, as realistic prostheses are usually weaker than the body parts they replace and detachable, making them easy to lose. Also, the strength of Artificial Limbs could make a character be more reckless with it, as dumber ones might not realize that if they tried lifting something really heavy with said fake arm without reinforcing practically every other part of the body the prosthetic would be ripped out. And a weaponized prosthesis would be an obvious target for enemies.

May follow an I Will Tear Your Arms Off threat. Compare to the bloodier An Arm and a Leg. For a list of tropes that are prone to these, see Artificial Limbs and Anatomy Arsenal.

Subtrope of Good Thing You Can Heal!.