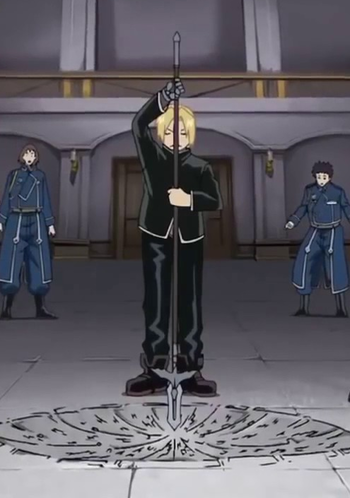 You can't make a metal weapon without any metal first.
"Humankind cannot gain anything without first giving something in return. To obtain, something of equal value must be lost. That is alchemy's first law of Equivalent Exchange. In those days, we really believed that to be the world's one, and only truth."
— Alphonse Elric, numerous times throughout the series, Fullmetal Alchemist (2003)
Advertisement:

Power always comes with a price.

To acquire the ability to perform something, induce motion, bring change — to bring something into existence, grant a wish, heal a loved one, or even bring someone back to life — someone must give up another thing of equal value. This trope has a simple dramatic purpose: it prevents the pitfalls of a typical Story-Breaker Power by adding laws and the elements of choice and sacrifice.

Would you give up the gifts, love, and life you possess to get what you desire? Beware the allure of Desire, however, because it doesn't always work in your favor — people may not truly understand the full effects of what they desire, and the gift itself can end up becoming its own cost. King Midas thought of the Golden Touch as a great boon, but it ultimately robbed him of his greatest treasure: his daughter.

This trope has a layer of truth to it, given the First Law of Thermodynamics

. Building in the cost to the boon usually results in a Fantastic Fragility.

The principle of Equivalent Exchange typically says the object or goal a person will trade for must have equal value to what the person trades with. Who and what determines this "equivalency" varies from story to story:

Compare this trope to Balancing Death's Books, Conditional Powers, and Mutual Disadvantage. The tropes known as Call It Karma and The Golden Rule attempt to apply this law of physics into ethics and morality. A Physical Attribute Swap or a Transferred Transformation result when this is applied to Shapeshifting, and Swap Teleportation is when it applies to Teleportation.