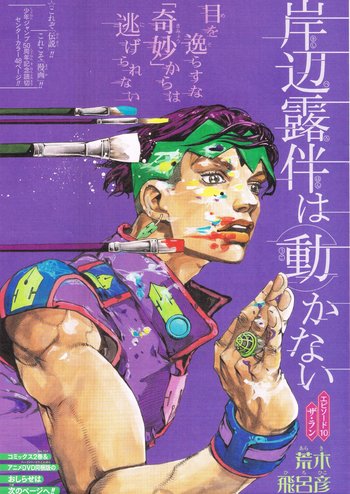 Two OVAs of these stories were made by David Production. One based on "Millionaire Village" was given to those who purchased the entire set of Diamond is Unbreakable blu-rays or DVDs, while "Mutsu-kabe Hill" was bundled with the second volume of Thus Spoke Kishibe Rohan. After the completion of Golden Wind, David Pro released two more adaptations of "At A Confessional" and "The Run" on December 8, 2019. A live-action drama mini-series airs on NHK in the 3 days leading to New Year's Eve from 2020 onward, while Netflix picked up the OVAs for distribution internationally in 2021.

The stories feature Unusual Chapter Numbers. In release order, they are:

Associated with the series while not being officially part of it is the one-shot Rohan at the Louvre, also featuring Rohan who investigates a supposedly cursed painting. Similarly, Kishibe Rohan Meets Gucci has Rohan going to the Gucci factory in Florence to inquire about his heirloom Gucci bag that makes things put into it seemingly disappear. There are also a series of short stories by various Japanese authors collected in anthologies with titles like Kishibe Rohan Does Not Shout and Kishibe Rohan Does Not Frolic. One of these short stories, "Kushagara" by Ballad Kitaguni, became the basis of an episode of the NHK mini-series.