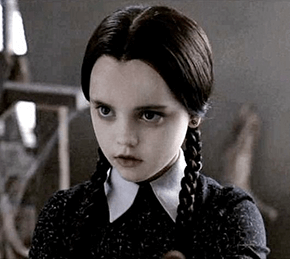 "I'll clean my room… in exchange for your soul."
Marge: [looking out the window to the front lawn] There's something about flying a kite at night that's so unwholesome.
Bart: [turns head to the window. In monotone:] Hello, mother dear.
— The Simpsons, "The PTA Disbands"
Advertisement:

They look sweet, innocent, even angelic, but there's something not quite right about them. They're too calm, too knowing. They aren't really children any longer, not at heart.

Children should be innocent and in need of adult protection. By inverting this, the trope arouses deep-rooted fears. The Creepy Child might not be physically dangerous, but their profound unnaturalness is just as chilling.

Creepy children are frequently female, and often Emotionless Girls. They can be, among other things, a Robot Girl, an Oracular Urchin, a changeling, a Waif Prophet, or Evil. As prophets, they emanate otherworldliness; as heroes, they may elicit distrust and contempt from the rest of The Team sans the Team Mom, and as villains they remain cute even while the bodies pile up around them. They usually have an Ironic Nursery Tune theme.

May be holding a Creepy Doll or a Balloon of Doom or enjoying Entertainment Above Their Age. A girl wearing an Ethereal White Dress is usually the Creepy Child. If a Creepy Child is shown drawing, it will usually be a Nightmare Fuel Coloring Book.

When she's in her angered state, Agatha can be quite scary.

When she's in her angered state, Agatha can be quite scary.