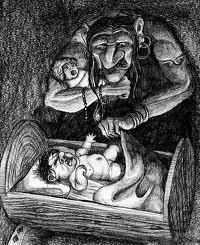 Before fairies went around granting wishes and bestowing Pimped Out Dresses to cinder maids, they spent a lot of time doing some serious mischief.

One favorite game of The Fair Folk was to abduct human infants and leave behind one of their own in exchange. This "change child" or changeling was just a ruse to conceal the theft: since it was actually a faerie, it would prove ungovernable and the parents would eventually have to get rid of it. The real baby, meanwhile, was taken to the Land of Faerie to serve as a conscript or slave.

According to most European fairy tales, baby boys and children with golden hair were in particular danger of being stolen by elves and possibly replaced by an unwanted child (often a Red-Headed Stepchild). Alternatively, the mother might be abducted, seduced, and impregnated by the Tuatha de Danaan (or local equivalent), resulting in a (possibly malevolent) fairy child. We know for a fact that Mama's Baby, Papa's Maybe in any of these incidents was not to blame in absolutely any way. Compare Alien Abduction.

Meanwhile, the "changeling" tag served as a "Just So" Story to conveniently explain physical and/or behavioural peculiarities that have since been demythified as Science Marches On. Before modern medicine and genetics did in the wizard, so to speak, this trope was almost certainly one of the more common backstories used for members of The Freakshow, as well as a potential rationale for abuse or infanticide.

To deter fey folk, infant boys were often dressed as girls, and Cold Iron would be hung over cribs and doorways. Common items included horseshoes, bells, nails, scissors and steel files. (What Could Possibly Go Wrong?) Early baptism was also encouraged, and it was often cited as the reason why mothers could not work for some weeks after childbirth: they had to watch over the baby to prevent this.

Simple abduction by fairytale beings also counts under this trope. Due to the inscrutable nature of the Fair Folk Returns Policy, 1:1 replacement of your child is not guaranteed.

The earliest fairy tale versions are Older Than Print. Contrast Moses in the Bulrushes, where the parents do the switching. See also Foundling. Compare Persephone, Year Outside, Hour Inside, and its inverse Year Inside, Hour Outside.

Subtrope of Doppelgänger, The Fair Folk, Land of Faerie, Invasion of the Baby Snatchers, and very often Switched at Birth. Not to be confused with the Lighter and Softer Changeling Fantasy, which is a Rags to Riches/Cinderella Plot.