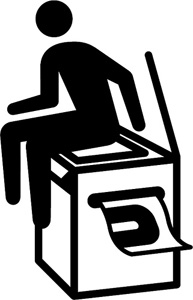 Considering all the other images we could have used...
Now is not a good time to photocopy your butt and staple it to your boss's face — oh no!
— "Weird Al" Yankovic, "Your Horoscope for Today"
Advertisement:

A standard juvenile office prank, where the subject drops his trousers, plants his rear end against the glass of a photocopy machine and presses start. Hilarious!

Don't Try This at Home, kids. See "Real Life" below to find out why. Mooning is this trope's more direct cousin, with the advantage of this trope being that it can be done both in advance and not in range of retaliation by the victim. Subtrope of Joke of the Butt.

Jerry messing around the copy

Jerry messing around the copy