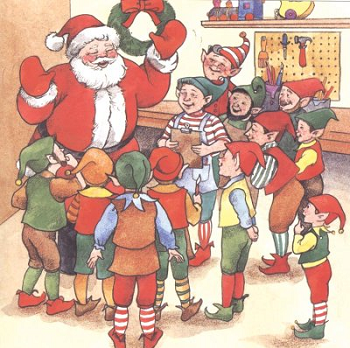 Not pictured: Legolas.
"Elves should be making toys, not casting spells!"
— Zeus, The Order of the Stick
Advertisement:

Santa Claus' little helpers. They vary from story to story, but they have a tendency to be short. How short and the reason for shortness varies. Some are so short they live in a Mouse World or they may just be 3 feet tall. They may simply be dwarfs (of the real life variety, not that kind), or they can be slow-aging and resemble children despite being Really 700 Years Old. They are cheerful and love working for Santa and are great with children. Other times, they are a mischievous and somewhat disgruntled work force griping about the Boss and hiding the beer at work and so on...

They usually dress in bright green and other festive colors and wear pointed shoes and hats. Despite living in one of the coldest parts of the world, they seem very poorly dressed and are hardly ever seen with coats. Contrast this with their boss, who is hardly ever seen without his large red coat and boots. Justified Trope: Santa works outside, in the cold night air; elves work inside, in the warm toy-factory. Although Santa is sometimes described as a "Jolly Old Elf" or implied to have elven blood.

This trope can extend to other elves who do not follow the typical portrayals of a fantasy elf.

Interestingly, Christmas Elves are not actually elves in all countries. For instance, the French version of the Santa Claus mythos calls them "lutins" (the most widespread type of Little People, essentially comparable to Leprechauns without the Irish stereotypes), as opposed to "elfes" (the French word for elves). Because of this, some European depictions of the elves, while generally similar to the American version, may exhibit dwarf-like beards that would look out of place on an "elf".

An especially common, consistent version of Our Elves Are Different. A type of Little People. See also Christmas Town (where they live) and Santa's Sweatshop (for the cynical version).

In the Christmas pageant, Mindy portrays an elf and sings about building toys.

In the Christmas pageant, Mindy portrays an elf and sings about building toys.