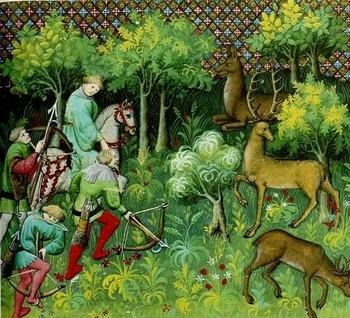 A grand hunt is when the wealthy and/or noble decide to go hunting. This is invariably done for sport, rather than for food — often the aim is an impressive trophy to mount on their wall, but even if the hunted animal is cooked and eaten, the hunters are doing it for the entertainment value, not to put food on the table. Hunting this way generally takes a significant amount of time, equipment, and personnel. This restricts a grand hunt to usually upper class members. A grand hunt usually includes specialized weapons, animals trained specifically for the purpose, and/or experts in order to help make the hunt successful. A hunter on a grand hunt will almost always travel with an entourage — a handful of assistants to carry the equipment and handle the animals at least, and dozens of servants and courtiers brought along to serve the hunters' every possible whim at most. (For musical purposes, count on these to include a few horn players.) Anyone who actually hunts for food often see these hunts as elaborate wastes of time and money, but to the grand hunters the point is to create a social occasion (with all the attendant opportunities for networking and politicking) rather than to just kill some animals.

In theory, a grand hunt is perfectly safe, but watch out for a Hunting "Accident" or Upper Class Twits who can't shoot straight.

There are several types of grand hunts, depending largely on the type of game being hunted.

Frequently overlaps with Upper-Class Equestrian, since only rich people could raise all these horses with which to go hunting for fun. See also Hunting the Most Dangerous Game, when the prey is human (or something else intelligent). Not related to Hunter of Monsters, whose prey is always some supernatural creature and usually done alone, but the Egomaniac Hunter and the Great White Hunter may take part in a grand hunt. See also The Wild Hunt, which is a grand hunt conducted by a hunting party of supernatural spirits — usually (but not always) hunting humans. Can be a Snooty Sport if it's done by the rich and depicted as obnoxious.