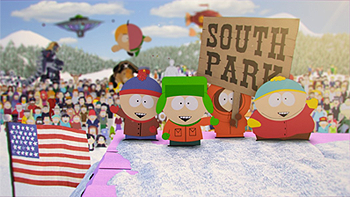 Pictured: Pretty much everyone.
Advertisement:

This page is for the show; for the South Park franchise as a whole, see South Park.

I'm goin' down to South Park, gonna have myself a time!
(Stan and Kyle: Friendly faces everywhere, humble folks without temptation!)
Goin' down to South Park, gonna leave my woes behind!
(Cartman: Ample parking day or night, people spouting "HOWDY, NEIGHBOR!")
Headin' on up to South Park, gonna see if I can't unwind!
(Kenny: *mumbles something perverted** translated to either "I like girls with big, fat titties! I like girls with deep vaginas!", "Me, I got a ten-inch penis! Use your mouth if you wanna clean it!", "Someday, I'll be old enough to stick my dick up Britney's butt!" or "I like fuckin' silly bitches and I know my penis likes it!")
So come on down to South Park and meet some friends of mine!
— The theme song, sung by Les Claypool
Advertisement:

South Park is an [in]famous long-running Animated Shock Comedy by Trey Parker and Matt Stone on Comedy Central. Arguably the defining Subverted Kids' Show, it debuted in 1997 and follows the misadventures of a group of elementary school kids in the titular mountain town of South Park, Colorado.

The central characters are Stan Marsh, the Straight Man of the group; Kyle Broflovski, a morally fixated Jew (and Stan's best friend); Eric Cartman, a fat, sociopathic bully; and Kenny McCormick, a young pervert who is usually rendered unintelligible by his tightly drawn orange parka (although his lines get progressively more understandable through the series) and who frequently gets killed in horrifying ways, only to return in the next episode no worse for wear.

These four main boys and their friends, family, and neighbors find themselves embroiled in all sorts of weirdness, ranging from cults, aliens, and monsters to exaggerated-for-comic-effect versions of Ripped from the Headlines problems to obvious parodies of action and family movies. It's also well-known for containing loads of swearing, violence, and poop and fart jokes (at least early on).

While the Author Tract is very evident, Matt and Trey make a point of targeting everyone. They've lampooned subjects near and dear to the hearts of social conservatives, social activists, socialists, liberals, religious fundamentalists, actively hostile atheists, corporations and business interests, anarchists, dictators, hippies, trendy people, geeks, teenagers, the elderly — seriously, you could name just about any kind of group and the show's probably done something to piss that group off.

An astonishingly short turn-around time helps keep the show topical with current events. The show is produced using the same graphics engine that helped create the dinosaurs in Jurassic Park, which fostered comparisons to building a sandcastle with a bulldozer; only the early shorts and the pilot episode were done by hand via cut-outs and physical backdrops. In some cases, an episode can be produced a matter of days before it airs, allowing for current events to be parodied almost as soon as they happen. An episode on the capture of Saddam Hussein aired just a few days after it happened, and excerpts from both Barack Obama and John McCain's post-election speeches were featured in the episode that aired less than 24 hours after the election results came in. Each episode is completed in less than a week's time before being submitted to Comedy Central; the show has only missed its deadline once, due to a power outage. The documentary 6 Days to Air: The Making of South Park sheds light on this lightning-fast production schedule.

For its first sixteen seasons, individual seasons were split between two different "halves" (usually comprised of seven to eight episodes). Starting with Season 17, the show runs for a single ten-episode chunk in the fall; this is done to accommodate Matt and Trey due to the success of their Broadway show The Book of Mormon (and the fact that they're not the young men they used to be when they made a paper-cutout animation about foul-mouthed third graders as a Christmas gag gift). From Season 18 and onwards, the show tends to follow a continuous plotline throughout each season. Late 2019 marked the show's 23rd season, giving it more than 300 episodes. Trey and Matt have stated that they will continue to make South Park as long as Comedy Central lets them. On August 6, 2021, it was announced that the show was renewed to Season 30, and that 14 new specials would be made for Paramount+, beginning with South Park: Post Covid on November 25, 2021.

We had to split South Park trope examples into pages because Cartman's fat ass got tired when he had to read them all in one go:

Example of:
A Form You Are Comfortable With