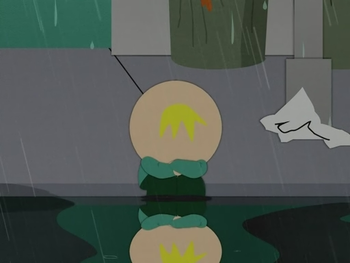 South Park may be known for being so offensive it's funny, but they've also managed to get us teary eyed.

As a Moments subpage, Spoilers Off applies here. All spoilers are unmarked. You Have Been Warned.

For moments specific to a particular entry, go to the following:

"Cartman's Mom Is A Dirty Slut"

Up the Down Steroid

The Death of Eric Cartman

The Return of Chef

PeeThe Minorites in My Waterpark song was supposed to be Played for Laughs, but Cartman just sounds so disheartened in it, just listen to it for yourself. https://youtu.be/F6BUZZ3qvZM

It's A Jersey Thing

I Should Have Never Gone Ziplining

The City Part of Town

Douche and a Danish

The End Of Serialization As We Know It

A Boy and a Priest

The Problem with a Poo

Back to the Cold War