I Just Want to Be Normal 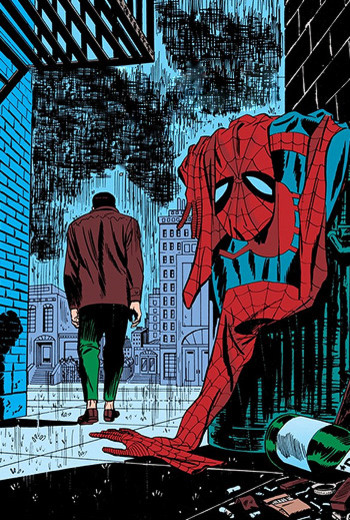 Peter Parker's finally tired of Spider-Man's messes.
Frodo Baggins: I wish the Ring had never come to me. I wish none of this had happened.
Gandalf the Grey: So do all who live to see such times, but that is not for them to decide. All you have to decide is what to do with the time that is given to you.
— The Lord of the Rings: The Fellowship of the Ring
Advertisement:

They didn't want these powers, this magic, this curse, or whatever it is that was foisted upon them. The responsibility to save the world? Forget it! All those exciting adventures and the ability to potentially do anything? Take them away. They want nothing to do with it.

Needing to be normal often comes in waves. Often, it hits critical levels, and the character threatens to quit, or even does so temporarily.

While this is all well and good, most writers conveniently forget that after such an exciting and exceptional existence, everything else will seem dull and meaningless to most people. Not only are special abilities usually given up, but sometimes also cherished friends. Some people psychologically will be unable to adjust, and most will acquire deep-seated mental issues about the whole process.

This can also include situations where overt powers or the like are not involved, wherein the characters are involved in an exceptional situation. It can also occur when characters, for no particular reason other than that the show is ending or that they're leaving it, have a sudden and usually implausible epiphany that they really want to live a "normal" life. Somehow this almost invariably includes them cutting ties with the entirety of the rest of the characters and locations.

When done well, this can be an interesting metaphorical exploration of how even the most blessed can feel isolated and abnormal. When done poorly, it comes off as cheap angst that will get tiresome, especially if the premise of the show relies in some part on that "Special-ness".

One common subversion is Can't Stay Normal where the character finally becomes normal, but is not able to adjust to it, and longs for their old life back. Or just as they achieve their normality, something happens where they NEED their abilities back, particularly to save the Love Interest. Either may be a 10-Minute Retirement, the former may be a Sequel Hook. If someone is constantly being forced by the plot to do heroic things, when really they want to be left alone, they're Heroic Neutral.

See also Cursed with Awesome, Internalized Categorism, It Sucks to Be the Chosen One, Who Wants to Live Forever?, Refreshingly Normal Life-Choice and Refusal of the Call. Contrast Jumped at the Call, where wanting to be normal never even occurs to the hero and Keeping the Handicap, where the character chooses to stay disabled (or similar) even if they could feasibly cure it. Naturally, the opposite of this trope is I Just Want to Be Special. See also Blessed with Suck, when the hero has every reason to want to be normal. Related to I Just Want to Have Friends when the character wishes to be normal to develop relationships. Also related to Give Him a Normal Life, when they leap at the chance to arrange this for their offspring.

Not to Be Confused with Plot Detour where the writer prevents the character from progressing (possibly to string out the length of the story). Compare and contrast Nominal Hero, where a character ends up fighting for good even though they lack morally positive motivations.