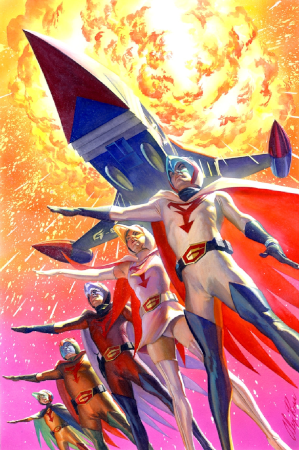 Science Ninja Team Gatchaman was one of the earliest anime to which American audiences were exposed in the late '70's (but not the first anime that American audiences were ever exposed to — that honor most likely goes to Astro Boy in the early '60s). The original series appeared on Japanese television in 1972, produced by Tatsunoko Production; 105 episodes were originally produced, but the English translations used only 85 of those episodes.

The show revolves around five heroic teenagers in bird suits who use ninja type weapons. Each hero drives a special vehicle which combines with the God Phoenix mothership, which is then able to fire missiles and convert to the Kagaku Ninpo Hinotori ("Science Ninja Art: Firebird", or "Fiery Phoenix" in Battle of the Planets). Gatchaman was, in fact, the very first place the concepts of Five-Man Band (hero, cool guy, token female, precocious kid, big guy with a hick accent), and Combining Mecha intersected. The heroes mostly waged battles against the Monster of the Week built by the evil Galactor crime syndicate / terrorist army, which was ultimately led by Sosai ("Leader") X, an alien supervillain who wanted to rule the Earth, and Berg Katse, a mutant who could shift genders at will.note Although, in the second dub, G-Force: Guardians of Space, Berg Katse ("Galactor", after the organization) is portrayed as the leader, with Leader X ("Computor") portrayed as being merely a consultant.

Gatchaman first appeared on American television in 1978, syndicated as Battle of the Planets, which has its own page.

In the mid-80s, after the popularity of BOTP waned and Sandy Frank was trying to find a new way to market the series, Turner Broadcasting Services became interested and acquired the rights to produce a new adaptation. In 1986, Turner hired Fred Ladd to reissue Science Ninja Team Gatchaman as G-Force: Guardians of Space, and it briefly aired in the summer of the following year. Although the stories were much truer to the original, the budget was much lower than that of Battle of the Planets, while the voice acting, dub names, and horribly, horribly repetitive background music were considered by a lot of fans to be very inferior. After its initial run and a brief revival on the Cartoon Network in 1995, G-Force fell back into obscurity.

The second and third series were then localized by Saban Entertainment in 1996 as Eagle Riders. As bad as Gatchaman was edited for consumption, the later two series were downright butchered into one series, with some episodes even merged with others and a plot twist manufactured to tie both series together. Only 13 episodes of Eagle Riders saw the light of day in America, as the rest of the series would be aired only overseas.

A lot of older American anime fans saw it as kids from one or another syndicator, and have a nostalgic soft spot for it. Many critics do consider it to be a historically important anime. Considering its competition in its time in the realm of Super Hero animated television series was Superfriends, then the superior animation and writing of Gatchaman easily made this series the best in the genre until the DC Animated Universe began in the 1990s.

The series was revived in 1994 as a 3-episode OVA with character designs by Yasuomi "Mezzo Forte, Kite" Umetsu and a soundtrack by Maurice White of the band Earth, Wind & Fire. A CGI Revival film animated by Imagi Animation Studios (who rose to fame with TMNT) was scheduled for release in 2010, but the project entered Development Hell and never came out. More recently, Ken, Joe, and Jun have appeared as playable characters in Tatsunoko vs. Capcom alongside some of Tatsunoko's other greatest hits. A Continuity Reboot anime series titled Gatchaman Crowds premiered in July 2013, though it's largely In Name Only. A live-action movie adaptation

was released in August of 2013 and features Tori Matsuzaka (Takeru Shiba/Shinken Red) as Ken. Ken appears alongside other Tatsunoko heroes in the Crisis Crossover Infini-T Force released in 2018, with Joe showing up for The Movie.

that they had acquired the license for Gatchaman, and they later released both the entire 1972 anime series and the 1994 OVA on both DVD and Blu-Ray.