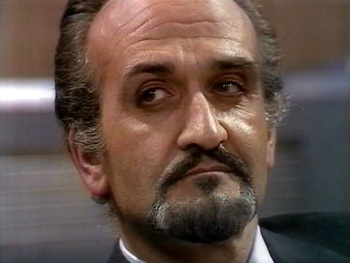 Roger Caesar Marius Bernard de Delgado Torres Castillo Roberto (1 March 1918 – 18 June 1973) was an English actor best known for being the first actor to play recurring antagonist the Master in the long-running science fiction series Doctor Who. He had a tendency to be typecast as a villain on shows like Danger Man and The Saint.

He appeared as the Master in eight serials over the course of three years. A ninth, to be called The Final Game, was planned but scrapped following Delgado's sudden death. He was killed in a car accident while filming a miniseries in Turkey. His friend Jon Pertwee, who played the Third Doctor, said this was a major factor in his decision to leave the series the following year.