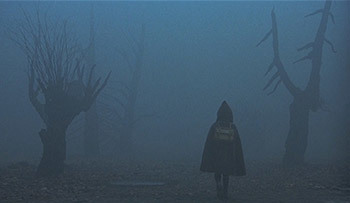 "To one who, journeying through night and fog,
Is mired neck-deep in an unwholesome bog,
Experience, like the rising of the dawn,
Reveals the path that he should not have gone."
— Joel Frad Bink
Advertisement:

If the environment is empathic, it should be possible to read your situation from the weather. Anyone with even a whiff of genre-savviness knows that dense fog is about as bad a sign as a howling tornado on the horizon. Is sometimes accompanied by a blood-red sky.

May overlap with Mysterious Mist. For a fog that's actively trying to kill you, see Fog of Doom.