Spoilers for all Metroid entries preceding this one, specifically Metroid: Other M and Metroid Fusion, will be left unmarked. You Have Been Warned! 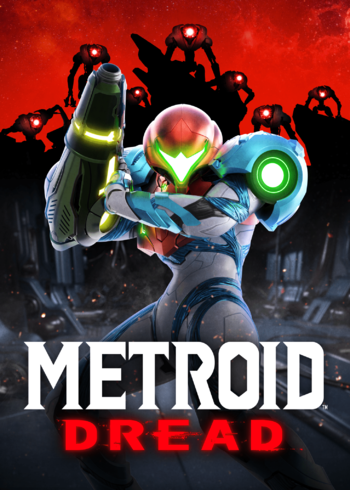 Metroid project "Dread" has at last reached completion.
You are faced with overwhelming power. Your highest priority should be, simply, to survive.
—ADAM
Advertisement:

Metroid Dread is a 2½D action-adventure platform game for the Nintendo Switch, developed by MercurySteam and Nintendo EPD, following their collaboration on Metroid: Samus Returns. Also known as Metroid 5, the game is the sixth entry in the main Metroid series (and the 13th overall), and the first original 2D installment in the franchise since Metroid Fusion 19 years prior. Billed by Metroid series director Yoshio Sakamoto as the conclusion to the franchise's Story Arc revolving around Samus and her connection to the eponymous creatures, Metroid Dread takes place sometime after the events of Fusion.

When a video transmission from the planet ZDR suggests the presence of surviving X Parasites on its surface, the Galactic Federation dispatches seven E.M.M.I. robots to deal with the situation but quickly loses contact with them. Samus Aran decides to find out the truth herself, as the Metroid DNA infusion she received after her first encounter with the X makes her the only living being immune to infection by them.

But while her initial expedition into ZDR's depths reveals the remains of yet another ancient Chozo colony, she soon finds that the ruins are not completely abandoned this time — a large Chozo warrior in a Power Suit much like hers attacks and leaves her depowered and cut off from her ship on the surface. And her subsequent survey of the area where she is now trapped shows that the Chozo warrior and local fauna aren't the only threats lurking on the planet — the E.M.M.I. have turned hostile and seem dangerously bent on stalking and killing our heroine. Samus must continue fighting her way through the caverns of ZDR with the help of the "Adam" A.I. who guided her on her last mission, all while seeking answers to what connections the E.M.M.I., the Chozo, and the X might have.

The game released on October 8th, 2021. Alongside the game, a pair of amiibo were released, consisting of Samus in her new Powered Armor and an E.M.M.I. unit. On February 9, 2022, the game received a free update that added two new difficulty modes: Rookie (i.e., Easy Mode) and Dread Mode. On April 7, 2022, another free update added three different Boss Rush modes: a standard Boss Rush, Survival Rush, and Dread Rush.

Videos pertinent to Metroid Dread include the E3 2021 announcement trailer

of the Nintendo Treehouse presentation, the August 2021 trailer

, and the September 2021 Overview Trailer

. A developer's log called "Metroid Dread Report" updated every few weeks between the game's announcement and release, and is available on the official website here.