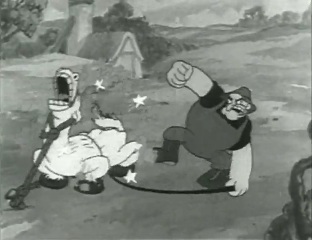 "The righteous care for the needs of their animals, but the kindest acts of the wicked are cruel."
— Proverbs 12:10, The Bible (New International Version)
Advertisement:

Animals considered to be dangerous, such as crocodiles, snakes, bears, sharks, and big cats are usually an exception, though; see What Measure Is a Non-Cute? for a possible reason, though it may also have a lot to do with the fact that those animals aren't as defenseless and therefore are not seen as easy victims, though they are still likely to be seen sympathetically under certain circumstances. Pets in particular are seen as defenseless, as tame animals tend to trust humans. Furthermore, they may be a threat to people and understandably force them to use violence. As Real Life shows, however, there may be exceptions with people neutralising the threat of dangerous animals in order to toy with them. In this case, they are as defenseless as the harmless animals and the perpetrator is just as bad as the others and even more clearly a Dirty Coward.

An almost sure-fire way to make a character irredeemable is to invoke this trope. In addition, animal cruelty, especially mutilations, is often treated as an early warning sign for future violent criminals. Serial killers are especially common in this regard. Sometimes, however, the whole thing may be played for Black Comedy (and Cringe Comedy) instead, in which case the show may take Refuge in Audacity and the person involved may not exactly be bad so much as he's stupid.

Note that as a general rule, the abuse must be human-on-animal (or, in Speculative Fiction, sapient-on-nonsapient), except for situations involving Furry Confusion. The animals must also not be anthropomorphic. Being able to use a human language is acceptable, but the animals in the work must have roughly the same relationship with humans as they do in real life, so far as the humans concerned don't know about their sapience.

Kick the Dog and If You're So Evil, Eat This Kitten! are not always related, since any act of gratuitous evil besides hurting animals can be substituted there. See also Cruella to Animals and Exotic Entree for more specific variants, and Enemy to All Living Things for a more supernatural one. Chronic Pet Killer may also overlap if the killing isn't done on accident. Contrast with Black Comedy Animal Cruelty, when this trope is Played for Laughs. Animal Lover is the direct inverse.

While exaggerated in fiction, psychologists have even observed

that animal abuse is a common early warning sign of a Serial Killer. As noted on the same sources

, this is especially true of children living in an abusive environment who may use an animal to reenact violent episodes from their life. Given help, many of these kids grow up to lead healthy and productive lives.

Since there is a lot of debate on what does and does not count as animal abuse, No Real Life Examples, Please! As a rule of thumb, your example will need to legally qualify as animal abuse in Real Life in order to count. Also, just like Abusive Parents, this trope is not for complaining about people you don't like.

Sub-Trope to Good Taming, Evil Taming. Compare Menagerie of Misery, in which bad people also own zoos and abuse animals.

For in-depth information on the awful subject, see the article