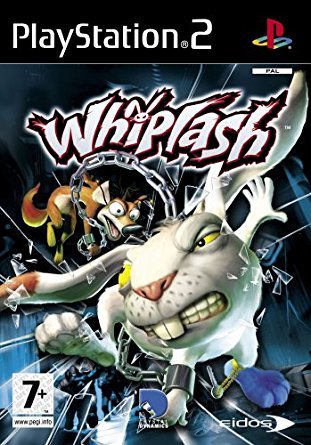 "In a World… where a voice from the Heavens tells you to 'cut loose'."
Advertisement:

Whiplash is a 2003 platforming game for the PS2 and Xbox. You play a genetically altered weasel and rabbit who are handcuffed together and trying to escape an animal testing facility. You directly control Spanx (the weasel) while Redmond (the rabbit) is dragged along and used as a bludgeon.

After breaking out of containment, Spanx and Redmond follow the advice of a mysterious voice in the computer system to try and escape from Genron while freeing other test animals from cartoonishly cruel experiments. A running secondary goal of the game is to smash stuff. There's actually a running counter at the bottom of the screen showing how much money the company has, and a little is deducted for every fire extinguisher you break. The platforming is relatively generic, but much of the fun of the game comes from the simple fact you're destroying a large corporation by bashing it with a rabbit.

Not to be confused with Fatal Racing, which uses the same title inside the States, the 1960s Australian western, or with the 2014 Film starring Miles Teller and J. K. Simmons.