Video Game / Whispers of a Machine 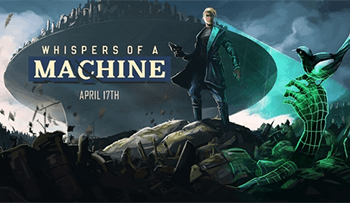 Whispers of a Machine is a 2019 point-and-click Adventure Game, developed by Clifftop Games and Faravid Interactive and published by Raw Fury. It's a sci-fi Nordic Noir with heavy Cyberpunk elements, set in a post-apocalyptic future.

Vera Englund is a rookie special agent of the Violent Crime division of the Central Bureau, sent to the remote town of Nordsund to investigate the murder of a museum curator, since the local cops have almost no experience in dealing with murder cases. In a post-Collapse world, AIs are banned, as is a whole range of advanced technology that may potentially lead to an AI. Special agents like Vera have been enhanced via a nanotech substance called Blue, which integrates into their bodies and gives them certain abilities that, in part, depend on their personality. Since Vera has been "enhanced" only recently, some of her abilities have not yet manifested. Some abilities are set, while others will depend on her conversation choices throughout the game (empathetic, analytical, or assertive).

Upon arrival to Nordsund, a town positioned atop a high pedestal, Vera learns of another murder that took place the night before. As is customary in such games, what seems like an ordinary murder will eventually unravel a conspiracy that may affect the entire world.

The game deliberately keeps the details of the setting vague by not mentioning any countries and introducing an Alternative Calendar that says nothing about when the events are taking place from our viewpoint. Unlike many other similar games, WOAM does not include the ability to manually save the game, instead keeping a running save that prevents Save Scumming. All decisions are final.