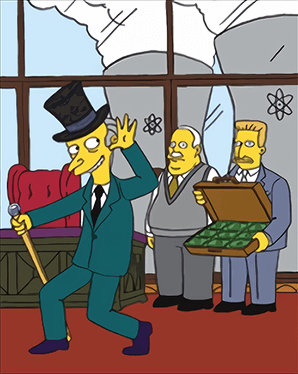 "Family, religion, friendship. These are the three demons you must slay if you wish to succeed in business."
"Excellent job! Now to restructure the banking system so that we will be able to rob the shirts off of poor people...uh, I mean, to invest prudently and generate wealth that will trickle down."
— Antonio Lopez, Tropico 4
Advertisement:

A senior manager, CEO or owner of a major definitely-for-profit corporation who is out to make as much money and gain as much power as possible, by any means available, regardless of who suffers. To that end, they are perfectly willing to violate business or social ethics, commit crimes (ranging from fraudulent accounting to mass murder), and devastate Mother Nature and human communities, justifying those actions under the name of "just business." They are confident that all they have to do is spread enough money around to get their way or avoid punishment, and are very likely to cross the Moral Event Horizon in their search for profit. They are also very, very likely to be White (or Asian) and male, like CEOs in real life.

Expect to find them at the head of an enormous boardroom table on the top floor of an Evil Tower of Ominousness. He may be a Bad Boss, but not always. A few of them can actually be very decent employers, with employees who are completely in the dark about their underhanded plans. If so, the public is often just as much in the dark. Naturally, this sort of villain tends to have an Amoral Attorney (or several) on his payroll, in case he does slip up, and a small stormtrooper army of "security personnel" who have carte blanche to commit any number and kind of violent crimes to get a good performance evaluation from the boss. If those resources fail, he often uses money to "buy" or even "own" officials.

They usually fail to consider the full effects of their plan, or the fact that they can make more by going legit, and at times the plan seems to have no concrete way of creating wealth. Usually, they remain in business thanks to Offscreen Villain Dark Matter.

A well-known variation of the CCE, which is popular in dystopian and Cyberpunk fiction, is the CEO or President of a megacorporation that produces and controls everything (even the authorities) and is the de facto ruler of the world. Similarly powerful CCEs are popular villains in superhero stories, as an explanation for why you need costumed vigilantes rather than ordinary police in the first place (because the local/national government works for the CCE, not the public).

Another variation of the CCE is the Robber Baron, a pre-80s, industrial revolution era manifestation that retains all of the CCE's cosmopolitan, far-reaching financial and political power, with perhaps even less governmental or media constraints to consider. Joseph Pulitzer, from the movie Newsies, is a perfect example of this subtrope. The Robber Baron will have a different wardrobe and jargon than the 80s CCE, as appropriate to his setting, but is otherwise indistinguishable.

Another variation on the CCE, found mostly in Walking the Earth series, is basically a Corrupt Hick with a business. The "corporations" they represent are not major multinational conglomerates, but small businesses like trucking companies, hotels, or other "mom and pop" ventures that simply want their competitors out of action. They tend to have little power outside of a single town or county, but can usually amass a small army of redneckish goons and threaten violence with impunity by virtue of paying off local law enforcement and/or the judiciary. This flavor of Corrupt Corporate Executive favors harassing a competing store owned by a kindly old man/woman and/or their family.

This is one of the inevitable progressions that any ambitious character will end in. See Also There Are No Good Executives. Occasionally, the CCE will be the producer of an Immoral Reality Show. If the executive is a caricature of a certain someone with fake poofy hair and lives in a giant tower, then that is a Trumplica.

See also the Corrupt Politician, who is likely to be his drinking buddy, the Morally Bankrupt Banker, who is his other drinking buddy and the Amoral Attorney, a brigade of whom will be found on his payroll. A CCE will either be in regular contact with the local Diabolical Mastermind or (if particularly organised, competent, and disinterested in petty matters of legality) will be one himself. Compare Greedy Jew and Pointy-Haired Boss. Contrast Honest Corporate Executive, the CCE's natural enemy. But remember that sometimes, Even Evil Has Standards (and/or Loved Ones), especially in a What You Are in the Dark situation.

Sadly, this trope is all too often Truth in Television, but be that as it may, No Real Life Examples, Please!