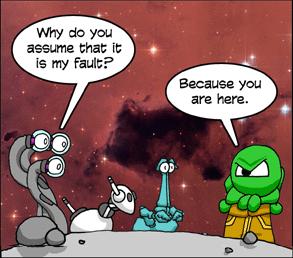 Spoorflix (in spacesuit), Minionbot, Sid, and Vexxarr doing what they do best: Assigning blame for failures.
"Your logic is your weakness..."
Advertisement:

is a comedy Sci-Fi webcomic by Hunter Cressall. The initial setup sounds similar to Invader Zim: An alien Evil Overlord sends his flunky to conquer Earth, mostly to get him out of the way. However, it plays out quite differently. For starters, the flunky Vexxarr is quite well aware that he is incompetent, or in his own words: "Let's say I know a thing or two about being volunteered for one-way missions." Secondly, Vexxarr tries an open invasion, with The War of the Worlds-esque walkers. It fails miserably, and Vexxarr is captured. Initially, the comic showed Vexxarr living on Earth. After a while though, Vexxarr was allowed to leave, and since then the comic has centered on Vexxarr's journey through the galaxy, and trying to find a place that isn't inhabited by something that wants him dead. Or worse.

During his travels, he has picked up several new passengers, as much as Vexxarr would wish otherwise. Currently, Vexxarr's crew includes his robotic lackey Minionbot, his ship AI Carl, a legion of repair drones, Sploorfix and Sid. To give an idea of Vexxarr's typical day: The first three either diss him, play pranks on him, or try to kill him, Sploorfix shifts between Emo-mode and Wide-Eyed Idealist-mode, and Sid is a member of a prey species that is terminally afraid, despite being virtually indestructible. In short, if at any time Vexxarr's incompetence is insufficient to ruin his day, one of his "friends" will do it for him.