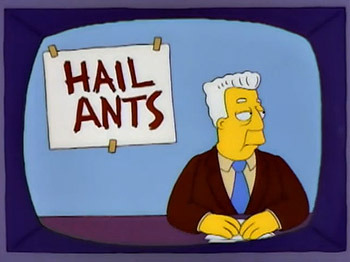 "And I, for one, welcome our new insect overlords!"
"It has come to my attention that some have lately called me a 'collaborator', as if such a term was shameful. I ask you, what greater endeavor exists than that of collaboration? In our current unparalleled enterprise, refusal to collaborate is simply a refusal to grow — an insistence on suicide, if you will. Did the lungfish refuse to breathe air?"
— Dr. Wallace Breen, Half-Life 2
Advertisement:

Named after Vidkun Quisling, who assisted the Germans in their conquest and occupation of Norway during World War IInote prior to this, he was known for helping explorer Fritjof Nansen in humanitarian work during the Armenian Genocide and Russian famine. So not only was he a traitor to his nation, he became a traitor to humanity., The Quisling is the poster person of Les Collaborateurs, who appears whenever one country or culture is being conquered, occupied, or colonized by another, whether it be a human Evil Empire, an Alien Invasion, an AI uprising, The Legions of Hell, or some other foreign enemy. They do everything possible to curry favor with the new rulers - they speak the invaders' language more often than their own, ape the foreign customs, and refer to their hometown as New Invaderia, Airstrip One, or Egopolis instead of Freedomville. They might justify this on the grounds that by securing a position of power and influence, they can ensure the occupation is as painless and least oppressive as possible — this may be genuine or an excuse to grab power. Sometimes, this person will have been a friend of the heroes before the invasion, but will often be someone who had always given our heroes a hard time. Often, they will also try to make them "see reason" and stop their futile attempts to restore the old regime. Frequently has elements of the Obstructive Bureaucrat or The Dragon. When conversing with the conquering leaders they will probably be Opinion Flip-Flop personified.

Despite all this, the Quisling is never seen as an equal by the conquerors, but at best as a useful tool to keep the natives in line. At worst, they hold them in almost as much contempt as the Quisling's own people. Either way, they won't hesitate to dispose of them once they outlive their usefulness. If the invaders value honor, expect them to eventually get killed BECAUSE they're a traitor to the cause: at least the other invaded have a sense of pride and honor!

What distinguishes the Quisling from other Collaborateurs is authority. A Quisling will never be considered an equal by the conquerors but will have a position of power that will be used to influence the conquered people. They will often be the local "poster child" for submission to the conquerors. If a character has a minor job within the conquerors' hierarchy or simply chooses to accept the conquerors' rule rather than resist, then they are Collaborateurs but not Quislings.

Their storyline tends to end in one of a handful of ways:

Note that "Quisling" is rarely heard in the United States. This is because Americans have their own term for the same thing. See Real Life, below.

Compare to Professional Buttkisser. Contrast with Head-in-the-Sand Management, who is not actually in the employ of the villain, but ends up helping them anyway through inaction or counterproductive actions, and the Peer-Pressured Bully, whose malicious acts are the result of societal pressure.