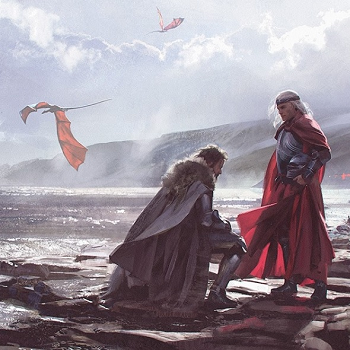 The King who Kneltnote After watching entire armies get completely massacred by the flying beasties in the background..
Advertisement:

The standard mode of territorial expansion of The Empire is steamrolling all opposition in the targeted neighbor land and claiming it as its new vassal state-slash-province. However, some places and people prove too troublesome to conquer and the empire leaves them alone. And then some of them decide to swear allegiance to The Emperor, anyway, for the benefits that a large centralized state brings with it — minus all the inconveniences of being forcefully subjugated by a foreign invader.

Characters coming from such a region commonly enjoy privileges and personal freedoms that the rest of The Empire's citizens (except the metropolitans) no longer have.

Compare/contrast Hegemonic Empire, where The Empire doesn't expand through conquest, but instead incites other states to voluntarily become its vassals by peaceful means (in effect, making this trope a norm instead of exception). Compare also Puppet State, Les Collaborateurs, and The Quisling. Vichy Earth may or may not be an example as well.

open/close all folders
Anime and Manga
Fan Works
Literature
Advertisement:
Live-Action TV
Tabletop Games
Video Games
Real Life
Too many examples to count, really. Prior to the Thirty Years' War, which established the "Westphalian theory of sovereignty", most rulers were at least de jure in some sort of vassal–overlord relationship to other rulers, and preeminence in such relationships was immensely important; on the other hand, those relations usually included at least nominal "protection," and for some smaller territories, it was highly desirable to become the vassal of a powerful faraway lord in order to be left alone by less powerful local lords with designs on conquering them. The mess this created is one of the reasons why the Holy Roman Empire had the name it did, as it was basically the medieval equivalent of calling your People's Republic of Tyranny the Democratic People's Democratic Shiny Happy People's Republic of the People today.