Video Game / Sword of the Stars 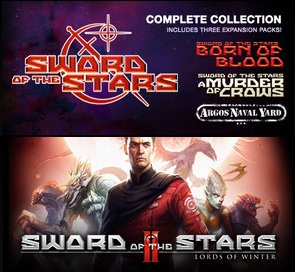 A series of Video Games in a shared universe and associated backstory created by Kerberos Productions.

In a far-distant future, after ecological disasters caused the deaths of millions, humanity has united and reached into the stars. An accident with a deep scanner ring aimed at the sun has given access to a dimension known as Nodespace, making FTL travel a reality. The military/space organization known as SolForce heads humanity's defense and space exploration and readies a colonization project.

However, mere moments after the first node-drive equipped colony ship is launched, Earth is attacked by a fleet belonging to a race known as Hivers, and only survive utter destruction by firing the species' entire stockpile of ballistic missiles at the invasion, forcing their retreat. After the dust settles, the remnants of humanity gather under SolForce's banner, which is intent on seeing humanity take its place amongst the powers of the galaxy at any cost. SolForce's official motto is "Per Ardua Ad Astra" (Latin meaning "through hardship, the stars"), but it's an open secret that its true motto is "Repensum Est Canicula" (literally, "Payback is a Bitch"). As the Node Drive allows humanity to expand, they not only discover that the Hiver 'invasion fleet' was only an explorer fleet belonging to one of countless Hiver clans, but they also discover the Proud Warrior Race Tarka, who consider the object of war to be to kill the other guy first however effectively you can and gleefully pounce on anything weaker than them. Eventually, they also encounter the mysterious Liir, a race of intelligent, telepathic, telekinetic, (mostly) pacifistic dolphins who were former slaves of a unknown species, the Suul'ka, now supposedly extinct due to the Liir rising up against them.

Wikis for the released games:

Further information specific to the individual titles is found within the folders below.

open/close all folders
The Sword of the Stars Universe
Sword of the Stars Prime
The story related above is only the backstory: Prime allows you to play as any of the four races and the gameplay is standard 4X gameplay; you start with one planet in an unexplored map, explore, build your empire, encounter other players, and stop when everyone else is reduced to a small, scorched smear in the ruins of its last colony. Sword of the Stars was intentionally scaled back on most parts to streamline the game and put focus on the battles, which are fought in real-time with player input, much like in the Total War series. The battles are in 3D with Newtonian physics and real-time calculations. Unusually, the tech tree is randomized and thus no two games are entirely the same technology-wise.

The first expansion, Born of Blood, added a host of new gameplay additions and a new species called the Zuul (no relation to Ghostbusters), a race of Super Soldier marsupials designed by the Suul'ka, out on a holy crusade to find their masters and brutally enslave and kill off anything else in their path. A second expansion called A Murder of Crows was later released, adding even more complexity, like diplomacy and trading, and a new species called the Morrigi, a race of ancient bird-people who once ruled most of known space, who have come back from the brink of extinction (again, at the supposed hands of Suul'ka) to reclaim their old colonies and burial grounds from the new upstarts—by force, if necessary. A final expansion pack called Argos Naval Yard, basically a big hunk 'o ship parts and technologies, was released in June 2009.

Sword of the Stars Prime provides examples of the following tropes:

was released in October 2011. Set slightly over a century after the start of the first, it was supposed to usher in the return of the Suul'ka and the development of diplomacy and warfare to an all-new level. However, the game was released well before it was ready. Backlash ensued, and Kerberos promised to inform the player base when the game was actually done. As of June 1st, 2012, the "pre-all clear version" has been released and the game can be considered to be almost at the "release candidate" stage and therefore playable. The game was finally declared "done" a year and a few days after it was actually released on the unsuspecting public.

Sword of the Stars: Lords of Winter provides examples of the following tropes:

Sword of the Stars: The Pit
A Roguelike spinoff called Sword of the Stars: The Pit was released February 21, 2013. When an incurable plague breaks out on the human planet Arbuda IV, the only hope lies in descending into the depths of a mysterious and deadly underground facility rumoured to have been established by the Suul'ka. As one of three characters, each with their own reasons for being there, you must brave the monsters and traps within in hopes of reaching the bottom, where the cure reportedly lies.

Sword of the Stars: The Pit provides examples of the following tropes:

Sword of the Stars: Ground Pounders
On August 9, 2013, a hex-based wargame spinoff in the vein of Panzer General called Ground Pounders was announced, with an alpha demo following a few days after. As the name suggests, it focuses on planet-based combat in contrast to the grand space scope of the main games. A Kickstarter was launched August 29,

but failed to make funding; a less ambitious retry that cut out playable Tarkas among other features went to Indiegogo on October 1,

but also failed to make it. It eventually went to Steam Early Access on February 8, 2014.

On September 25, 2014 the Tarkan Campaign was released, re-adding the playable Tarkas.

The tropes below are grabbed from the public alpha of the game.

Sword of the Stars: Ground Pounders provides examples of the following tropes:

Alternative Title(s): Sword Of The Stars The Pit