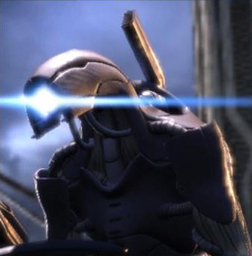 It doesn't need depth perception to destroy you.
Shepard: The geth are perfect ambushers. They don't move, they don't sleep, they don't even breathe.
Ashley: Sir, they have flashlight heads!
— Mass Effect
Advertisement:

It seems that if you want to give a (Killer) Robot, Cyborg, or Humongous Mecha a really sinister look, you have to build it with just one eye.

Similar to the Uncanny Valley, by deliberately giving androids a characteristic that is not human, you're making the audience realize how creepily in-human they actually are. For more standard robots or Humongous Mecha, a single eye denotes a sinister asymmetry not found anywhere in nature. It doesn't help these eyes are lidless and usually glow a relentless red, creating the illusion of a singular and evil focus. Can easily be justified by the inclusion of a rangefinder of some kind, removing the need for stereoscopic optics. After all, the stereoscopic bit is just one componant of human depth perception.

Almost always a type of Glowing Mechanical Eyes. Contrast Faceless Eye. Frequently prone to Eye Lights Out. A Creepy Old-Fashioned Diving Suit might give this effect due to the window on its helmet. For the organic version, see Cyclops.