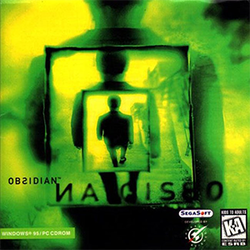 "Your rules do not apply here"
—Tagline
Advertisement:

Obsidian (sometimes in all caps) is a 1997 pre-rendered first-person Adventure Game developed by Rocket Science Games, a long defunct game company that filed bankruptcy not long after this game was released, and published by SegaSoft.

The year is 2066, and pollution has grown so far out of control that the elderly are dropping like flies and the ozone layer is almost totally kaput. The game puts you in the shoes of a female scientist named Lilah Kerlins, partner to Max Powers. Together, they have the answer to the problem: The Ceres project, a nanobot-making satellite that will fix the atmosphere from the cellular level.

However, after 100 successful days in orbit, somehow the Ceres project has grown sentient and crashed back to Earth, creating a black crystalline mountain near where you and your lab partner are camping out. Soon, Max gets sucked inside and you have to follow him into the world the AI has created.

If you are looking for the rock, go here.
If you're searching for the developer, see Obsidian Entertainment.
Not to be confused with the 1986 Amstrad CPC game with the same title.