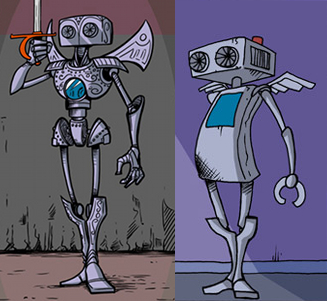 Left: Seraph 1.
Right: Seraph 13.
"Why would a prototype be more efficient than the finished model? Did they think that Big Daddies being fast, flexible and capable of self-preservation was just not being fair on everyone else?"
— Yahtzee, discussing BioShock 2, Zero Punctuation
Advertisement:

A Super Prototype is a testbed version of some piece of technology — be it a Humongous Mecha, Space Fighter, or Killer Robot — that is, for some reason, superior to the mass-produced version. A super prototype will have better weapons, stronger armor, and higher-quality speakers than the units rolling off the assembly line. Even when there aren't very many of whatever device was designed in the first place, the prototype model is almost always the most powerful or has at least some advantage over the other models.

A question that often comes up is why the super prototype is so, well, super compared to the production model. The typical reason given is that the production model is far cheaper or easier to make in large numbers. Except that this defeats the whole purpose of a prototype — something built to test the feasibility and capabilities of a final product and correct any flaws before mass production begins, meaning ideally you want your test unit to be as similar to your production unit as possible. As such, real-life prototypes are frequently highly similar to if not indistinguishable from standard models. Mostly, this is just a case of letting The Hero be that much more awesome than everyone else.

Writers tend to find various reasons for why the Prototype is better which usually fall under a few general lines of reasoning.

A closely related trope is the Ace Custom. See also Reed Richards Is Useless and Bigger Stick. Related to (and often exists for the same narrative reasons as) the Conservation of Ninjutsu.

The Opposite Trope is the Flawed Prototype and Superior Successor. Technically. Since most prototypes have more than one attribute, overlap can occur where it has both flaws and superiorities. The Phlebotinum Rebel usually is both, with superior abilities but inferior obedience, so it does not carry out the purposes it was made for.