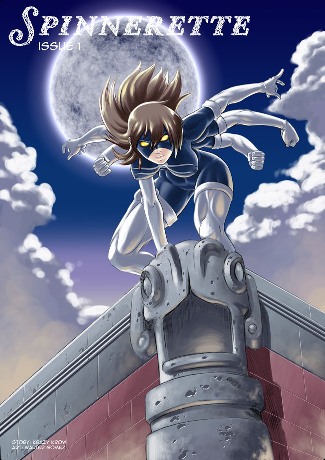 is a Webcomic (and subsequently print comic) produced by Krakow Studios and written by Krazy Krow (real name Sean Linsday). Unusually, it has had three artists. Walter Gustavo Gomez, who illustrated most of it, as well as Fernando Furukawa and Rocio Zucchi. It updates twice weekly.

The premise? Mild-mannered lab assistant Heather Brown is forced to clean up the lab by her boss one night when, due to a Freak Lab Accident with a genetic infusion chamber, Heather gains the powers of a spider. She now has superstrength, can shoot webs out of her lower back (not her butt), and has, most obviously, four extra arms. With these powers, Heather decides to fight the forces of evil as the costumed superhero Spinnerette, while hiding her secret identity (and extra arms) from the citizens of Columbus, Ohio.

She is not alone in her endeavors. Helping out is her roommate Sahira, who acts as her Secret-Keeper, seamstress, and voice of reason. There is also the local superhero team of Tiger (a huge man with Super Strength) and Mecha Maid, a maid in power armor.

Spinnerette is largely an Affectionate Parody of Superhero stories (most prominently Spider-Man, of course), all about Heather's forays into the world of superheroism and the many problems that can come with it. Humor is largely derived from Heather jumping headfirst into superheroics without any forethought, and the problems that causes. But it's an upbeat comic (for the most part) and Heather's many troubles never get her down.

In 2018, Krow began working on a prequel spin-off comic called White Heron, featuring the eponymous South Korean superhero who debuted in the Colonel Glass arc; as well as a series of Patreon-exclusive NSFW graphic novels.