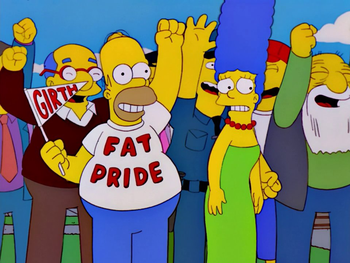 I'm fat and I'm lazy, and I'm proud of it!
Dan: Whoah! You're a big, fat cow!
Lorenda: Why yes I am! It's so good to see all my efforts finally being noticed!
— Dan and Mab's Furry Adventures
Advertisement:

In TV Land, most characters will freak over gaining a few pounds, and instantly pull out the carrots and celery. And those who are overweight will usually try to deny it. But not these guys (or at least not anymore). These are the few, the proud, the fat. They have no qualms about their size and will complain when they lose weight. They may even try to gain more weight, although this is not seen as often. If female, this character is almost always a Big Beautiful Woman. Big Beautiful Man if male. Sometimes they are Big Eaters. They might also be strong, quick, and resilient.

See also I Am Big Boned and Big Fun. The opposite of Weight Woe. Acrofatic, Kevlard, or Stout Strong characters take serious pride in this. Go ahead and tell them You Are Fat, but be prepared for a strong counter.