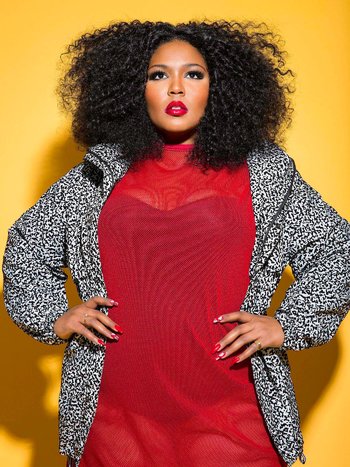 "Patiently, quietly, faithfully, worship me."
I do my hair toss,
Check my nails
Baby, how you feeling?
(FEELING GOOD AS HELL!)
—"Good As Hell"
Advertisement:

Describe Lizzo here. Well, according to the results of this DNA test, Lizzo is definitely 100% that bitch.

She was born in Detroit, Michigan, but moved to Houston, Texas as a child. When her father died when she was 21, she devoted herself to making it in the music business, and moved to Minneapolis, Minnesota after living out of her car for a year. There, she was briefly in an all-female group called The Chalice, but she had more success with her alternative hip-hop solo debut, Lizzobangers, released on Totally Gross National Product in 2013, and re-released through Virgin Records in 2014. The album was produced by Lazerbeak. To promote the album, Lizzo toured the US and UK opening for Har Mar Superstar. She made an appearance on The Late Show with David Letterman during this period.

Lizzo got the chance to work with one of her biggest influences when she made an Early-Bird Cameo with her Chalice bandmates and got featured on Prince's song "BOYTROUBLE" (from his album PLECTRUMELECTRUM). Lizzo called this experience a "fairy tale", and appreciated that Prince let her and her bandmates "do whatever we wanted."

The tail end of 2015 saw her second album get released on her own label, BGSW, entitled Big Grrrl Small World. This was recorded in Wisconsin at Justin Vernon's April Base Studios. It features "My Skin,"

an early example of one of Lizzo's many Self Empowerment Anthems, which Lizzo called "the thesis statement of the album." A review of the album, from Andrea Swensson of The Current, summed up Lizzo's whole vibe by saying that "There's an old feminist adage that says that the personal is political, and Lizzo seems to understand this concept intrinsically."

Then, things took a turn in 2016 when Lizzo signed to Atlantic Records. Her first release for them was the Coconut Oil EP, which switched her sound up and adopted more of a pop-rap approach with sounds of classic Soul and R&B. The first single, the Motown-inspired "Good As Hell," slowly gained traction just as her career did, and she toured with a group of dancers she dubbed the Big Grrrls, all plus-sized dancers. In the tenth and fourteenth seasons of RuPaul's Drag Race, she appeared as a guest judge.

In April of 2019, Cuz I Love You, her full-length debut for Atlantic, was released. 2017 single "Truth Hurts" was added to the deluxe edition after it gradually rose in popularity. The album also features booty anthem "Tempo" featuring another of Lizzo's biggest influences, Missy Elliott. The album became her mainstream breakthrough, and it pushed her to several nominations at the 2019 MTV Video Music Awards, including Best New Artist (a fan-voted award where she came in second to Billie Eilish), Push Artist of the Year, Best Power Anthem ("Tempo") and Song Of The Summer ("Truth Hurts").

Lizzo signed a deal with Amazon Studios to develop projects. The first one, an unscripted reality competition show, Lizzo's Watch Out for the Big Grrrls, premiered on March 24, 2022, featuring dancers competing for the chance to become part of the Big Grrrls group. The show was nominated in the Best Competition Program category at the 2022 Emmy Awards, resulting in a win and in Lizzo's first Emmy.

Lizzo is a huge advocate for Black Lives Matter, for body positivity, and for you, the person reading this, to love yourself as you are.