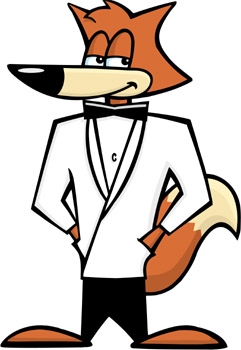 SPY Fox is a series of point-and-click children's games made by Humongous Entertainment. The first installment was released in 1997, with the series ultimately spanning three Adventure Games and two arcade-style shooter Gaiden Games.

The series follows unflappable superspy SPY Fox on his adventures, most of which involve stopping some kind of evil mastermind from conquering the world in one way or another. The series is an Affectionate Parody of spy films in general and James Bond movies in particular.

The Adventure Games, in order, are:

The shooter Gaiden Games, in order, are:

The series also spawned multiple children's books (which may not have been published), including SPY Fox: The Official SPY Manual and SPY Fox: Twenty Thousand Leaks Under the Sea, as well as a SPY Fox

Comic-Book Adaptation. Humongous also released a number of promo materials for the games, including stories featuring new villains that have never appeared in the games, such as Dr. Morrie Arty, Dr. Fu Manch Hugh, and Baron Von Bluefield

Advertisement:
The premises, by installment

A demo version of Dry Cereal can be downloaded

Tropes in the SPY Fox series: