Separated by a Common Language 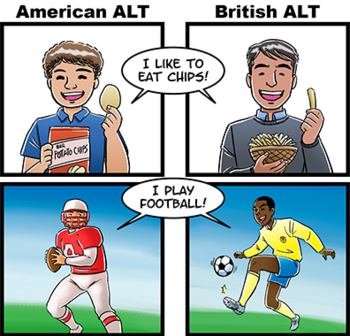 And we wonder why our students think English is so confusing?

"These chips, are fries
This queue, a line
This tap, a faucet
Wardrobe, a closet
Vacation, holiday
Underground, subway
Chemist, a drugstore
Autumn, is fall
A garden, a yard
You see now? It's not hard"
— MikeJ, "English to American"

Language can cause confusion even when two people aren't using separate languages. Often, it's enough for them to speak different dialects of the same language. This trope applies when the differences in dialects of a common language are used for humor or characterization. Most of the examples here are about the differences between British English and American English, but this can occur in any pair of dialects, in any language.

Confusion over dialects in Real Life varies from person to person, and depends on the situation. If British Alice says "throw it in the 'boot'" to American Bob in a story, without context he may be confused; but when they're obviously near to a car, it isn't a huge leap that she means that something should be put in the "trunk". A non-Irish reader may be confused by the phrase 'giving out'.

It can also be a giveaway when a writer sets a story in a land besides his native one. Many English and Canadian writers write for American audiences. Often they're so good at it that the reader doesn't notice—until a Texan character mentions something that happened "when I was at university." (An American would say "when I was in college" or "...in grad school" or simply "in school", even if he got his degree at a university.)note  This is because the line separating a "University" from a "College" is nearly nonexistent in the USA, as far as everyday speech goes... and "college" frankly takes half the effort to say and spell. Whereas most young, modern British characters would refer to "When I was at Uni".

People who read or watch a lot of fiction in another dialect will understand more words than expected, which may even be Lampshaded by the writers. Before the rise of the Internet in the early 1990s it was posited that the different versions of English might eventually diverge into separate languages; however, these days the Internet has made it possible to inexpensively speak to a friend in a like-language country on a daily basis in both text and voice — plus watch their TV shows and play video games with them, so only time will tell. Interestingly, this phenomenon was and still is far more severe when it comes to Spanish and French, to the point where Same Language Dubs are usually required — especially for Spanish, which is the official language of the majority of the western hemisphere and varies wildly across the continent and has two radically different dialects in Spain to boot.

See also Australian English and Did Not Do the Bloody Research. Compare Have a Gay Old Time, where the same word means different things in two different time periods rather than countries. On the other hand, this article

is about an in-depth difference between a language and a dialect. Contrast Inexplicable Language Fluency, when a character does understand a language they shouldn't be able to, and Language Barrier, which is Separated By Lack of a Common Language.

For more information on how this happens in Real Life, see the Useful Notes page.

Examples in fiction and media: