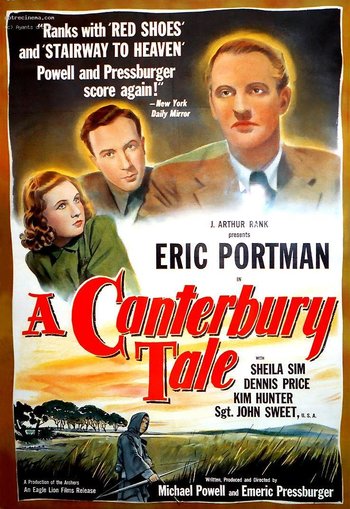 A Canterbury Tale is a 1944 British World War II film written and directed by The Archers, aka Michael Powell and Emeric Pressburger.

After a recitation of the prologue to The Canterbury Tales the film cuts to the modern day and modern "pilgrims". There are, as it happens, three pilgrims to Canterbury, all of whom have stopped off at the fictional village of Chillingbourne in Kent. They symbolize aspects of the Allied war effort circa 1943:

The three "pilgrims" are brought together by a peculiar incident. As they get off the train at Chillingbourne, Alison is attacked by a man who dumps glue into her hair. Peter, Bob, and Alison find out that the "Glue Man" has done this repeatedly to a lot of local girls. They look into the case and find a most unusual suspect: the eminently respectable local justice of the peace, Thomas Colpeper (Eric Portman).

All this is really just an excuse for a meditation on the beauty of the English countryside, the history of England and how the past resonates in the modern day, and how the English nation has rallied to fight Hitler.

Filled with a cast of unknowns. John Sweet, who played Sgt. Johnson, was a real American sergeant who never appeared in another movie. Sheila Sim (Alison) and Dennis Price (Peter) both made their film debuts, and both became huge stars. Charles Hawtrey, later a star of the Carry On film series, appears as the cranky railroad station master.