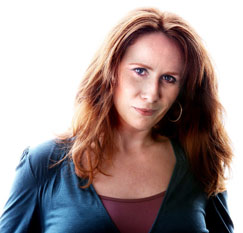 "All the funny stuff's down to Catherine Tate. I'm just her bitch."
— David Tennant
Advertisement:

Catherine Jane Ford (born 12 May 1968), known professionally as Catherine Tate, is a British comedienne. Having played guest roles in The Bill (who hasn't in the UK?), her big break came with The Catherine Tate Show. Her most notable character from that was schoolgirl Lauren, with her Catchphrase "Am I bovvered?"

Her next well-known role was playing Donna Noble in a well-received Doctor Who Christmas Special in 2006. She was brought back in 2008 as a full-time companion of the Doctor, and ended up becoming a fan-favourite character thanks to her truly excellent performance and her character's much-needed Character Development.

She had a similar experience with the American version of The Office, first making a guest appearance as Nellie Bertram in the final episode of season 7 then returning in season 8 as a major character.

After playing bit parts for the Royal Shakespeare Company in her younger years, she returned as a leading lady in 2011, playing Much Ado About Nothing's Beatrice opposite longtime friend and former Doctor Who co-star David Tennant. She's also joined the cast of DuckTales as iconic villainess Magica De Spell, once again playing opposite Tennant.