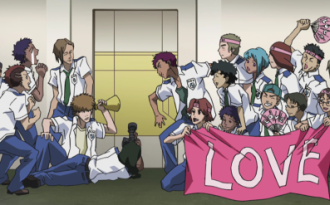 What no Idol Singer wants to run into fresh out of the shower.
"Billie and I got chased through the traffic once in a car. You expect paparazzi to do that, but when it's normal people you start to think the world's gone a bit mad."
— David Tennant
Advertisement:

In TV Land, whenever a famous musician or actor (or any kind of celebrity really) ventures out in public, there is good chance they will be descended upon by a Thundering Herd of screaming fans who will pursue, attempting to get their autographs, rip their clothes off, etc. The celebrity will probably find themselves forced to tactics such as hiding in garbage bins or donning ridiculous disguises to escape the Groupie Brigade.

Very much Truth in Television, versions of this trope have probably existed as long as there have been celebrities. However, it reached its apex in the 1960s and 70s as a result of Beatlemania. These days it is something of a Dead Horse Trope as most celebrities have security too tight to allow anything like this to happen, and fans must content themselves with flinging their underwear at their idols and other such shows of affection.

Compare Instant Fan Club. May overlap with Open the Door and See All the People. Can become an Angry Mob if someone expresses disdain for the focus of the group's adoration. See also: Celeb Crush which can result in Groupie Brigades. See also Paparazzi. For groupies as individual characters, see Groupie.

When pretending to be Zillon Brax, Cricket is swarmed by a group of fangirls.

When pretending to be Zillon Brax, Cricket is swarmed by a group of fangirls.