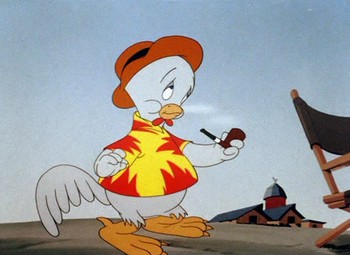 Porky Pig is the manager of the "Flockheed Eggcraft Factory". Every morning, a workforce of hens marches in and lays eggs in support of the American war effort, popping out eggs in an assembly-line manner. However, the hens are distracted by a very skinny rooster named "Frankie" who bears a notable resemblance to Frank Sinatra. The hens are so besotted by the charming Frankie that they stop laying eggs. Porky, who needs to get his hens back egg-laying, then has to find another crooning rooster who can charm the hens back to work. He finally gets help when he hires a Bing Crosby rooster.