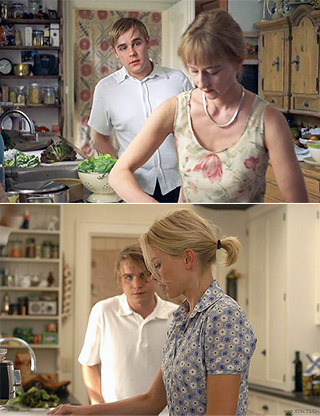 Above: Funny Games: The Austrian Version (1997)
Below: Funny Games: The American Version (2007)
"This 2011 version is so similar—sometimes song for song and line for line—that I was wickedly tempted to reprint my 1984 review, word for word. But That Would Be Wrong."
— Roger Ebert in his review of the 2011 remake

of the 1984 movie Footloose
Advertisement:

The Shot-for-Shot Remake is a remake that is nearly identical to the original, in almost every way. It'll use most of the same dialogue, have the exact same plot, and change very few things.

See also Setting Update. May lead dissenters to say They Copied It, So It Sucks! In animated works, often overlaps with Stock Footage. Sister tropes with the Multi-Animator Project.