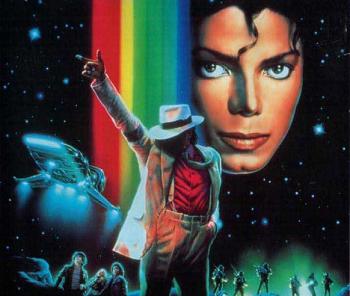 A movie like no other.
Timmy: Oh, look, look, Grammy. It's M-M-M-Mi-Mi-MI—It's M-M-Mi-Mi-
Grammy: Mantovani?
Timmy: No. MICHAEL JACKSON!!!!
Advertisement:

Moonwalker is a 1988 film starring Michael Jackson, and both his only major film appearance after The Wiz in 1978 and his only film as the star, not counting the posthumous documentary Michael Jackson's This Is It. It's best described as a Music Video anthology, with music mostly drawn from his 1987 album Bad. The eight segments are:

For the Sega game based on the movie, which served as one of the first major hits for the Sega Genesis, see Michael Jackson's Moonwalker. Not to be confused with the James Bond film, Moonraker, or the 2015 film, Moonwalkers, nor the one shot manga Moon Walker.