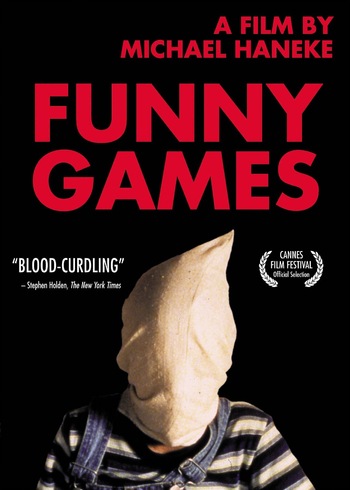 Anna: Why don't you just kill us?
Peter: You shouldn't forget the importance of entertainment.
Advertisement:

Funny Games is a 1997 Austrian satirical psychological thriller film written and directed by Michael Haneke. The film was given an American Shot-for-Shot Remake in 2007, also written and directed by Haneke and featuring an English-speaking cast (led by Naomi Watts and Tim Roth) and a mostly American crew. Considering Haneke wanted to make a film in America but had to make the original in Austria for practical reasons, the remake is in a way closer to his true artistic vision for the film.

Both films center on a yuppie family arriving at their lakeside vacation house. Pulling into their driveway, they see their neighbor has some new guests, two clean-cut young men wearing white gloves who look like they've just walked off the golf course.

The men soon arrive on the family's doorstep making a number of requests and imposing on their hospitality. Eventually, the family tires of them and ask them to leave, but they ignore the requests. After the husband slaps one of the men, they break his leg with his own golf club and take the family hostage.

Though maintaining a nonchalant and even friendly facade, it soon becomes clear that the two men are psychopaths who intend to spend the night torturing the family with a number of cruel games, holding a bet between themselves that no one in the family will be alive by 9:00 the next morning.

Although its surface-level premise is that of a home invasion movie promising gore and suffering aplenty, Funny Games is actually intended as a deconstruction of such films — and a giant middle finger to anyone who'd want to watch them in the first place. On a wider scale, the film also functions as a statement from Haneke on how violence is treated and portrayed by the medianote although it wasn't explicitly confirmed as inspiration, it is of note that the remake was released during a time when Torture Porn was a highly prevalent craze within American horror, and how horrific normally glamorized scenes and story conventions are when presented in stark form.