Film / A Futile and Stupid Gesture 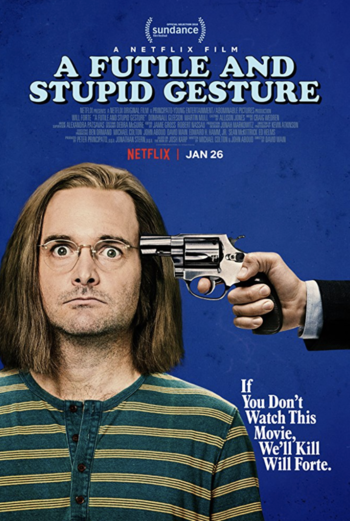 These last few days are among the happiest I've ever ignored.
Advertisement:

The movie stars Will Forte as Doug Kenney, one of the co-founders of National Lampoon, and follows him from the end of college through all his entertainment endeavors until his eventual death in 1980. Taking a look behind Kenney's productions such as Animal House and Caddyshack, the film also features Domhnall Gleeson as Kenney's lifelong friend and fellow National Lampoon co-founder Henry Beard, and features supporting roles from Joel McHale, John Gemberling, and Rick Glassman as Chevy Chase, John Belushi, and Harold Ramis, respectively, among other influential comedic figures throughout Kenney's life. The film was directed by David Wain and features a number of supporting performances from his fellow The State alumni.

A Futile and Stupid Gesture features examples of the following tropes: