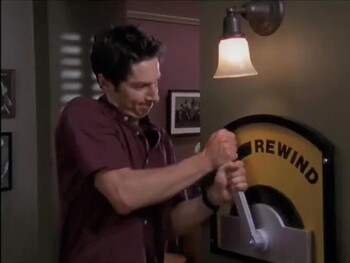 "Is it just me, or did someone hit 'rewind'?!"
— Ralphie, The Magic School Bus ("The Busasaurus")
Advertisement:

This is where a television show or film will have something go back the way it came by literally playing part of the video in reverse. The comedy comes from the actions becoming outright absurd and/or Squicky because people are walking backwards, falling upwards, undying, vomiting up their food and/or eating their vomit, etc. Audio is unintelligible due to it being played in reverse, but can add to the comedy due to its unusual sound.

Stuff blowing up... in reverse!
Taken from https://youtu.be/0QRPFFRzvt0?t=717

Stuff blowing up... in reverse!
Taken from https://youtu.be/0QRPFFRzvt0?t=717