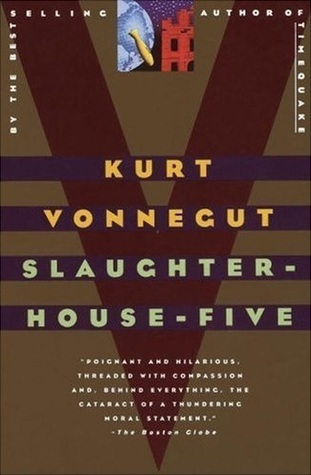 "So it goes..."
It begins like this: "Listen: Billy Pilgrim has come Unstuck in Time." It ends like this: "Poo-tee-weet?"
Everything was beautiful and nothing hurt.
Advertisement:

Slaughterhouse-Five, or the Children's Crusade: A Duty-Dance with Death is Kurt Vonnegut's 1969 novel about Billy Pilgrim, a soldier who witnessed the bombing of Dresden and subsequently gets kidnapped by Tralfamadorian aliens, who can see in all four dimensions and thus see all events in their lives in no particular order. Billy becomes Unstuck in Time, marries a nice girl, experiences death for a while, befriends Kilgore Trout (Vonnegut's recurring Author Avatar in The 'Verse), and lives his life like most other humans — just less chronologically. Tralfamadorians don't believe you can change anything, but that doesn't mean you can't choose to focus on a particular time, and to enjoy life the way it happens. Billy learns to accept life as well as death — if something dies, then so it goes.

Why aliens, and why time travel? Because Vonnegut wanted to write about his experiences in World War II, but he didn't want to write a story about Big Damn Heroes. Instead, his character is simply a meek observer: Billy gets to see the war and the world from a distance, objectively, as if through the eyes of aliens.

It caused a bit of controversy when it came out, as people were unwilling to believe that "the Greatest Generation" during "the Good War" could do evil. But his story about the Bombing of Dresden in World War II

is factual, as Vonnegut was there, initially as a POW working at a slaughterhouse and later involved in clearing the city of corpses and wreckage after the bombing. Although there is a question about how many died; it is said that in the book he got the numbers wrong. Still, 135,000 civilians or 25,000 civilians, dead is dead. So it goes.

An intensively autobiographical book (minus the time travel and aliens bits), Slaughterhouse-Five is one of the books Vonnegut is most remembered for and contains philosophies about free will, fate, life, and death, often through the use of irony. For example, scholarly discussion usually holds that Billy and the Tralfamadorians are the examples of what is wrong and that free will, and therefore moral responsibility to try to prevent war, futile though it may seem, are the correct paths.

Filmed in 1972 by George Roy Hill. Vonnegut liked it.

Adapted into a graphic novel in 2020 by Ryan North and Albert Monteys. Vonnegut was dead in that time. So it goes.