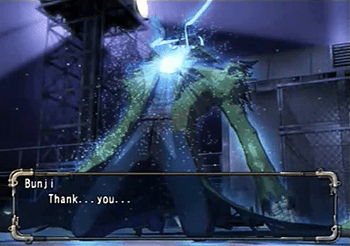 Morty: Why do you keep doing this to us?!
Rick: I don't know, Morty! Maybe I hate myself?! Maybe I think I deserve to die, I-I don't know!
— Rick and Morty
Advertisement:

At some point in the past, some characters have had a traumatic experience, found themselves dishonored, committed a crime they could not repay, lost everything worth living for, caught an incurable disease or just became bored with continued existence. For whatever reason, rather than turning to suicide, they went off seeking battles to fight, hoping to find an enemy who would kill them, and achieve an honorable, heroic, awesome, or otherwise acceptable death, sometimes going as far as outright surrendering and offering their life to their enemies. Martyrdom Cultures may regard such a character as a role model, even if upon closer examination they might seem like a Martyr Without a Cause. In cases of cruel Irony, Death Seeker characters who snap out of it and find something to live for often end up dying or getting killed shortly afterwards anyway.

Compare Heaven Seeker, when a heroic death is viewed as a means of being rewarded in the afterlife, and Suicide by Cop, where one engineers a scenario where someone else (it doesn't necessarily have to be a cop) will kill them. Contrast Immortality Seeker, for those utterly dedicated to avoiding death. Compare and contrast Not Afraid to Die, where someone is definitely unafraid of death but isn't actively seeking it out, and Worth Living For for something or someone who pulls a Death Seeker out of this mentality.

Likely to cause a Threat Backfire to any death threat, for obvious reasons. These characters are, however, prone to Revenge by Proxy. See also Miles to Go Before I Sleep and Suicide by Assassin. Some immortal characters who contracted a bad case of Who Wants to Live Forever? may also become Death Seekers if they know of one hard-to-obtain way for them to get a peaceful death.