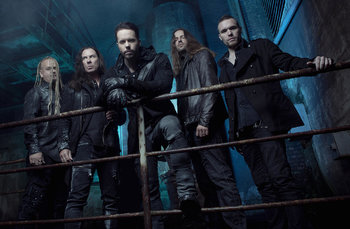 A Floridian Power Metal band formed in 1991 by guitarist Thomas Youngblood and drummer Richard Warner. Their first two albums are generally considered somewhat sub-par, mostly thanks to vocalist Mark Vanderbilt's mediocre singing, plus the completely unambitious songwriting but saw some success. Vanderbilt quit in 1998 because the band was becoming too big to balance with the other aspects of his life. It is doubted that many complained at this development.

Norwegian vocalist Roy Særtre Khantatat (also known as Roy Khan, or Khan, for short) of the then-recently broken up Conception took his place as a touring member and was soon asked to go sky diving with the band to secure a permanent place. He is considered by many to be a far better singer, and so this move is nearly universally considered a good thing. After one final rough album with Siege Perilous, they switched to a more progressive-influenced sound with The Fourth Legacy. Every album they've released since has been near universally loved by critics and fans alike. Along the way, they replaced their original bassist with the other one of two members to play on all of their albums up to Ghost Opera, Glenn Barry, their original keyboardist with ex-Blaze guitarist Oliver Palotai (after seven years of having no keyboardist), and their original drummer (who left at around the same time as Vanderbilt) with Casey Grillo.

In 2009, Glenn Barry had to quit the band due to problems in his personal life. He was replaced by Kamelot's original bassist, Sean Tibbets. As of April 22, 2011, Khan permanently left the band for various reasons: at first it was primarily health problems regarding his voice, however Thomas Youngblood stated that the primary reason Khan stayed away was due to "religious friction". It is hinted at that Roy was unsatisfied or unhappy with the much darker direction of Poetry for the Poisoned in comparison to their previous albums though Roy has kept open the possibility of personal projects in the future. The the vocalist position was temporarily filled by Fabio Lione of Rhapsody of Fire and the band chose Tommy Karevik, the lead vocalist of the Swedish progressive metal band Seventh Wonder, as their new, permanent vocalist.

Say my tropes, no beautifying filters...