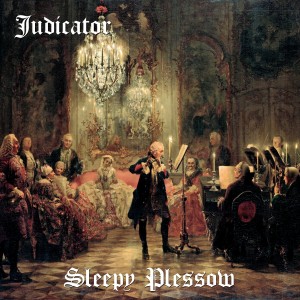 Judicator is an American Power Metal / Speed Metal band in the vein of Blind Guardian with lyrics focusing on important historical figures and literary works. Their first album, King of Rome, follows the events of Napoléon Bonaparte in his 100 days campaign, leading up to the climatic Battle of Waterloo. Their second album, Sleepy Plessow, incorporates elements of Progressive Metal, and focuses on Prussia and the life of Frederick the Great. The band was started as a collaboration between vocalist John Yelland and guitarist/instrumentalist/backing vocalist Tony C after they met at a Blind Guardian concert in 2010. Both musicians are involved in a variety of other bands and projects. In 2014, the band announced that they were going to be adding four new musicians to the group. A bassist, drummer, keyboardist and a second guitarist. They also announced an indigogo campaign to fund their new album. As of 2020, Alicia Cordisco left the band to focus on Project: Roenwolfe and transitioned the following year, but is still very good friends with the rest of them.

Tropes relating to the band and music:

"I REST MY WEARY HEAD AND SLEEEEEEEEEEEEP!"