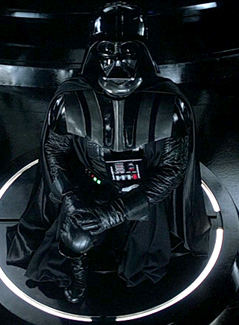 "What is thy bidding, my master?"
"This world and everything in it now belong to darkness! They belong to my master!"
— Ghirahim, The Legend of Zelda: Skyward Sword

A person or monster The Hero has to get past to get at the Big Bad. Much of the time, but not necessarily, the Big Bad's top enforcer. He, she or it embodies a narrative trope: the penultimate challenge that the hero must face before confronting the Big Bad. This challenge will test their worthiness in some fundamental way.

Some Dragons are ferocious fighters who leave the heavy thinking to the boss. Others are smart, detail-oriented administrators who oversee the day-to-day running of the evil organization. A common but by no means universal theme is to have the Dragon pose a physical challenge to the hero, while the Big Bad poses a mental or moral challenge.

This role is somebody the Big Bad can rely on (or thinks they can rely on) in a time of trouble to step up and beat the living heck out of The Hero, or maybe just take charge for a while, should the Big Bad not be around to do the job.

The term dragon for this role originates from analysis of folklore in which the hero fights dragons or other monsters. As described in "The Hero with a Thousand Faces", a non-fiction comparison of various fantasy heroes written by Joseph Campbell, monsters serve as obstacles to be overcome in order to fulfill the hero's quest. Note, however, that in folklore they are villains or obstacles in their own right (see the tale of Saint George The Dragonslayer) whereas in accordance with this trope (which mostly applies to modern media) they are often subordinate to other villains.

The Champion may be The Dragon if they follow the Big Bad, or may play a similar role to a straight Dragon for a nonvillainous character. See also: The Man Behind the Man, Hypercompetent Sidekick, Psycho for Hire, The Consigliere.

Tropes related to The Dragon:

Bianca is the apprentice to the Sorceress and acts on her behalf.

Bianca is the apprentice to the Sorceress and acts on her behalf.