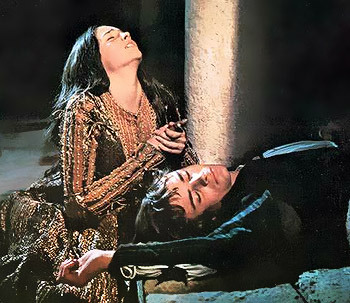 "O happy dagger, this is thy sheath. There rust and let me die."
Got bit
Fever hit
World gone to Shit
Might as well quit
— Message etched into a tree with a zombie hanging from it, The Walking Dead (2010)
Advertisement:

Whatever the reason (a guilty conscience, the world is simply too much to bear, self-hatred, whether reasonable or unreasonable, a belief that they're facing A Fate Worse Than Death, or simply having seen some really weird shit), a character may be driven to commit suicide. This may be as little as pondering their existence or as much as holding a gun to one's head. Most times, the character will have second thoughts, or will be talked down by a friend, but in shows where Anyone Can Die, the character may go through with it. In any case, this is a powerful way to underscore the desperation of the character. In a Backstory, being Driven To Suicide can illuminate the character's Dark and Troubled Past. On desperate occasions, this can be a happy ending, but only if a majority of the viewers agree, and this is very rare.

In some cases, the reason for suicide may not be depression, but honor, as with ritual suicide. This is obviously more common in Japanese works (as in Japanese culture, traditionally suicide can be done to cleanse one's honor) than in Western ones (as in most Christian sects, suicide traditionally is a shameful act — but classical settings allow it to be presented as honourable, e.g. in Shakespeare). It was also accepted by various ancient Greek philosophies, particularly that of the Stoics, as well as the ancient Romans and Egyptians, both of whom lauded it as a dignified and timely alternative to illness, dementia, or disgrace. Some Proud Warrior Races, such as the nomadic Scythians, preferred suicide as an alternative to dying in bed, thus making this trope Older Than Feudalism. By contrast, Abrahamic religions (Judaism, Christianity, Islam, et al.) abhor suicide, believing that only God is permitted to say when a life may be ended — however, there is considerable debate over issues like euthanasia, capital punishment, and killing in war.

Sometimes this is done to deliver An Aesop about teen suicide by having Long-Lost Uncle Aesop show up in a Very Special Episode.

At the other extreme, victims of The Corruption, Compelling Voice, or other forms of compulsion may resort to this to prevent the monster they are about to become from being unleashed on the world. This may allow Dying as Yourself.

This is regularly played for laughs, despite the risk of falling into "Dude, Not Funny!" territory. Also incidentally, deliberately pushing someone into suicide is treated the same as premeditated first-degree murder in many countries. Unfortunately, minors can be total monsters to each other, and grave bullying at school or elsewhere often can have very sad consequences (the bully more often than not also gets off with little worse than a simple slap on the wrist, too).

Subtrope of Murder by Suicide. Super-Trope to Leave Behind a Pistol. Sister Trope to Psychic-Assisted Suicide, Ordered to Die, Tricked to Death, and Suicidal Sadistic Choice.

Contrast Face Death with Dignity, where one chooses to face the music (and the bullets); Bungled Suicide and Interrupted Suicide, where the character's attempt fails or is stopped by somebody else; Happily Failed Suicide, where the character is grateful to be alive after all; Mistaken for Suicidal, where a character is mistakingly thought to be suicidal when they're not; Accidental Suicide where a character kills themself but had zero intention of doing so; and Suicide Is Painless, where the character has no reason to commit suicide, but does so anyway. Also contrast Seppuku, a form of suicide usually associated with Samurai, which is done to retain honor if all other choices mean violating it. Not to be confused with Too Dumb to Live, where a character makes a decision stupid enough to unintentionally lead to their own death.

Tragically, this is an all too common occurrence in Real Life, but due to the extremely sensitive nature of this trope and the fact we'd have WAY too many cases, please do not add real life examples.

This is a Death Trope, so expect spoilers, marked and unmarked.