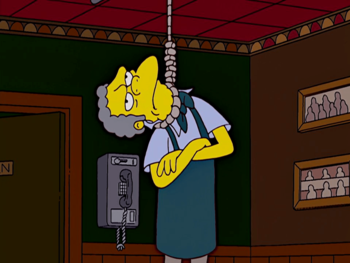 Why does this take so long?
"I'm so dumb I can't even kill myself."
— Twisty the Clown, American Horror Story: Freak Show
Advertisement:

A Bungled Suicide is when someone attempts to kill themselves, and fails. This may lead to them trying to kill themselves again, or maybe they'll see it as a sign and go on their merry way. It's not Interrupted Suicide; they go through with it... they just don't die, for whatever reason.

It may be because they possess some kind of immortality, or perhaps the means they used weren't effective enough. People who are for some reason physically unable to die usually cannot kill themselves no matter how hard they try. If done well, this trope can be either touching or tearjerking... and if done badly, it can just seem like the writers didn't have the guts to kill a character off. Occasionally it's Played for Laughs as a form of Black Comedy.

This is Truth in Television, Ate His Gun being a frequent source, although with firearms being the most lethal method, the great majority of these in Real Life involve drugs or cutting — the two least likely to work due to the time they require (which often leads to the attempter being found before it's too late) or due to the lack of knowledge of the attempter (trying to overdose on a homeopathic remedy, sideways cuts).

Fake Assisted Suicide is one way of invoking this trope. Compare Interrupted Suicide and Mid-Suicide Regret. Contrast Accidental Suicide, which is an inversion: a character is not trying to kill themselves but they end up doing so by accident.

A man attempts to kill himself by tying a noose to a moving car, but is thwarted when another car causes it to divert.

A man attempts to kill himself by tying a noose to a moving car, but is thwarted when another car causes it to divert.